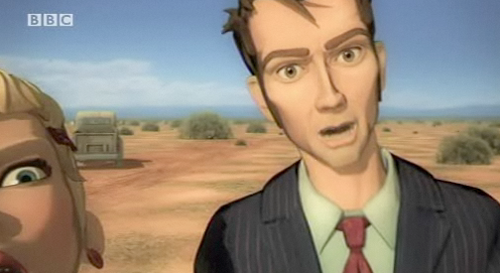 Described as "Doctor Who meets a Fifties monster B-movie", Dreamland, a new six-part animated adventure, premières daily on BBC Red Button and the Doctor Who website from Saturday 21 November.

Written by Phil Ford, Dreamland sees the iconic TARDIS touch down in the desert in the USA. Stumbling across a mysterious alien artefact in a local diner, the Doctor is led to Area 51, also known as Dreamland, the US' most secret base. He then finds himself on a momentous mission to rescue Rivesh Mantilax from the threat of the ruthless Viperox and the clutches of the American military.

Created in eye-catching high-definition 3-D animation, the series sees the Doctor, played by David Tennant, hook up with two new companions – Cassie (Georgia Moffett) and Jimmy (Tim Howar) – and pits him against a new alien race, the monstrous Viperox, led by Lord Azlok (David Warner). The multiplatform offering will be enhanced by a brand-new mobile comic reader application. 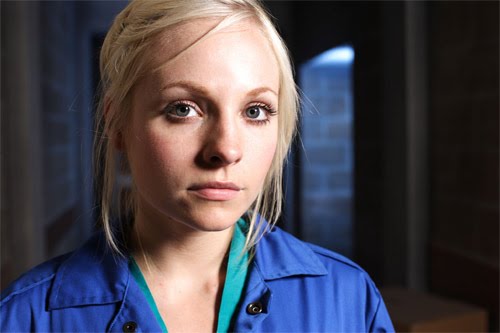 Episode 1
Dry Springs, Nevada, 1958. The Doctor befriends a young waitress, Cassie, and her friend, Jimmy, at a diner. The Doctor activates an alien artefact and, after finding further signs of alien activity, the US Army intervenes and takes him and his new companions to the mysterious Area 51 in Roswell, where they find out about Operation Fallen Angel. Will Operation leader Colonel Stark succeed in making the curious trio forget what they have just seen?

Episode 2
Seeking refuge in the abandoned town of Solitude, Jimmy stumbles across a disconcerting discovery and the trio encounter Viperox royalty.

Episode 3
The Doctor cannot understand why the Alliance of Shades' mop-up team are more concerned with the whereabouts of a piece of space flight hardware than the hordes of Viperox pods hidden underground. Things start to fall into place when Jimmy's grandfather, Night Eagle, introduces the Doctor to Rivesh Mantilax.

Episode 4
Captured by the US Army, Rivesh is finally reunited with his wife, Saruba Velak. Meanwhile, the Doctor discovers the unsettling truth about his real identity.

Episode 5
The Doctor and Saruba have to confront the mysterious alien force in the vault housing her space ship if they are to save her husband and stop Lord Azlok from rousing his sleeping army.

Episode 6
As sunset falls, the Viperox drones start to attack the US Army base. Can the Doctor find a way to halt the seemingly unstoppable aliens in their tracks? 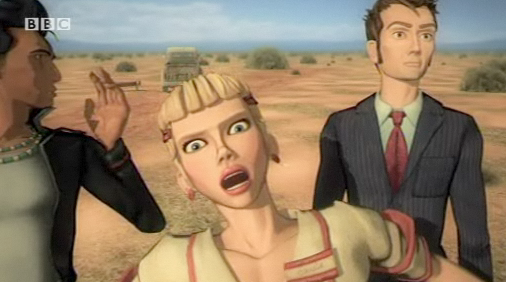 Dreamland is available on the following platforms:

Not available on Freesat