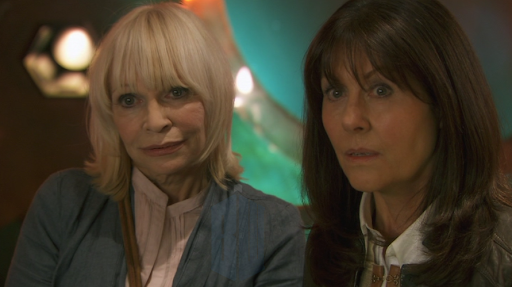 There's a moment in the first part of Death of the Doctor where Clyde, upon entering the UNIT Base in Mount Snowdon, is informed of another base on the moon to which the youngster says, "I'm running out of reactions!" That purty much sums up my feelings about this series of The Sarah Jane Adventures - so far, so flippin' good! 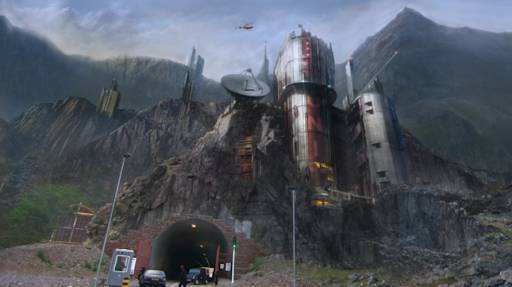 It's not just the always burrilliant core cast and guest stars (more of them later) or the top writers and stories this year but even the production values have been upped, or appear to be at least. Last week's CG spaceships are matched here with an equally impressive UNIT Base, a new planet, some neat body~changing jiggery~pokery and supremely entertaining direction - incredibly cinematic in its realisation. 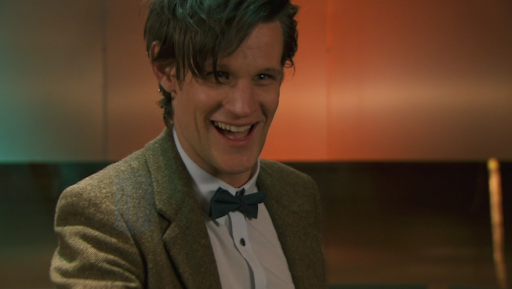 Much like last year's superb The Wedding of Sarah Jane Smith (starring a certain Davey T), everyone's favourite Time Lord doesn't show up 'til the end of the first installment - your anticipation will be at fever pitch when Matt Smith finally arrives in a most amusing and satisfying way. Before the latest incarnation appears, fans of Gallifrey's finest won't be disappointed as we're presented with numerous trouser~tightening flashbacks featuring Doctors 1-4. 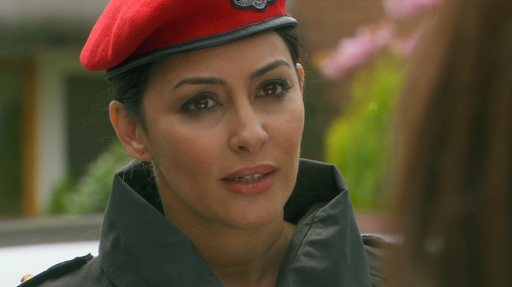 Why? Well, UNIT turned up on SJ's doorstep and revealed that the body of a Time Lord had been found and a funeral has hastily been arranged. From the get~go Sarah Jane is suspicious of the rather, it has to be said, good~looking UNIT hotty (pictured above) that's relaying the bad news. Accompanying the red beret~ed troops was their Murray Gold theme tune which was a lurvely touch and it's a pity they didn't extend this courtesy to Matt Smith's Doctor. Would've been nice to hear his excellent theme tune too; still, small point. 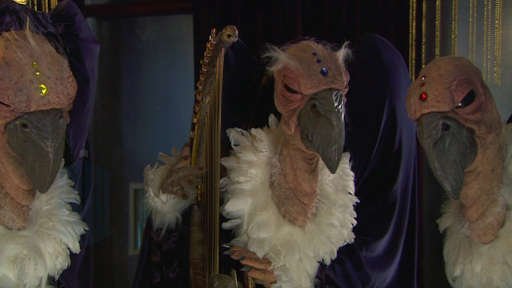 The flashbacks come at a fair pace when SJ & Co. are sitting, staring at The Doctor's "coffin". The Shansheeth, a rather wonderfully charming old~skool creation (that also sound not unlike Leslie "Well, Hello" Phillips), play an enchanting, yet beautifully haunting, melody on the harp that ranks as one of the finest pieces of music you'll hear this year - utterly evocative and fitting. It's little wonder that this tune lulls the gang into nostalgia, giving way to the flashbacks featuring The Doctor(s). 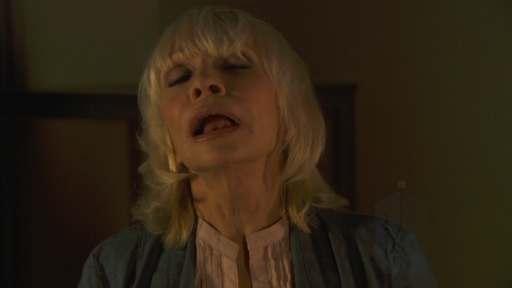 Though I'm not one for indulging in nostalgia (it's not what it used to be), there is something immensely stirring about seeing the former Doctors together like this, even stranger to think of Tennant as now being part of the past (there's also a raft of former enemies listed). But here, this fetish for history is not a positive. The Shansheeth have plans to utilise the memories of The Doctor's chums for their own needs... Whether or not the writer, Russell T Davies, is commenting on fan fascination with former glories is up for debate though his "role call" of companions at the end of part two will almost definitely have you tearing up (I shan't spoil the surprise of just who is mentioned), if not bawling your eyes out (as I did). 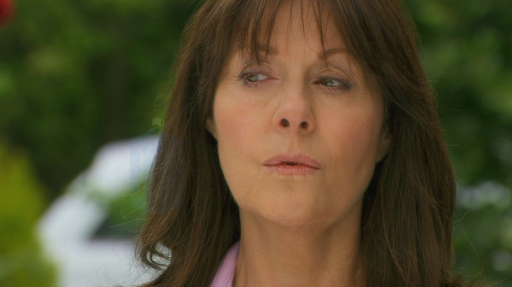 In many ways Death of the Doctor is about the companion, and the role he or she plays. It's a crucial part of his life and the show's history. I used to think it was always a bit harsh that they got dumped off rather abruptly, and sometimes unceremoniously, but the aforementioned role call repositions the end of their time with The Doctor and the start of their lives as everyday heroes. Truly touching and so pleasingly typical of Russell T Davies' sensitivity. 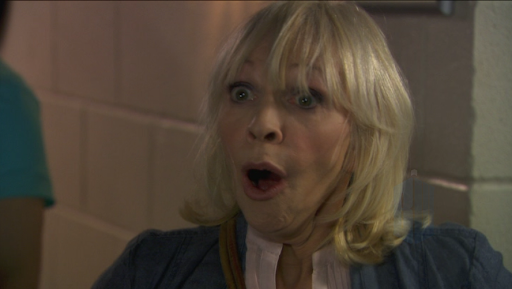 This sensitivity is never more apparent during two scenes involving Jo Jones (née Grant). The first sees Sarah Jane reveal that The Doctor has revisited her recently, which alone caused a pang of grief for Jo, and then further distressed her by the revelation that Sarah had seen him more than once. Further consternation comes as Jo questions The Doctor on having a married couple (Mr & Mrs Pond, no really) in the TARDIS, as she had left to get married back in the Seventies. It's an incredibly heartfelt moment with the Time Lord treading carefully as not to offend. 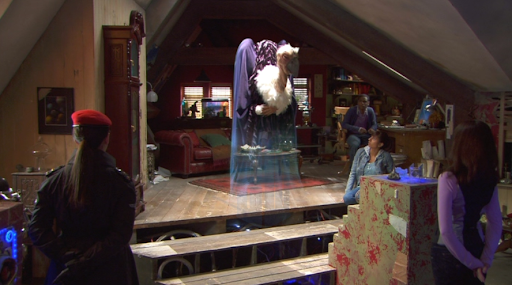 But it is at the end of their time together when we see the nature of Jo's relationship with The Doctor when he chooses to neglect mentioning the fate of the Time Lords, sharing a knowing look with Sarah Jane. Again, another one of the many heart string~tugging scenes perfectly played. But it's not all tears. There's many gigglesome gags to be found like: The Doctor calling Sarah Jane "Smith" (a la calling Amy, "Pond"); Rani's mundanity in the face of adversity, "I promised my dad I'd be in bed by half ten"; a catchphrase that Harry Hill would envy - "Accelerate the weave!"; and Jo's ageist reaction at seeing the latest regeneration of "her" Doctor (along with his rebuttal). 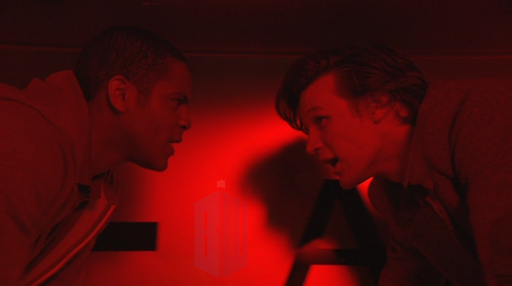 Matt Smith has much to deal with in his performance from the broad comedy of the backward shuffle and fun conversation with Clyde (see above), revealing some otherwise unknown facts about The Doctor (unless you have the internet and you've found out already), to the aforementioned emotion of the double companion scenario he finds himself in. He fits in with the gang with some style as does Jo's grandson Santiago, who may appear to be just a bland blue~eyed blonde boy but, in fact, has quite the spark of personality; his "exotic" background making Clyde and Rani seem almost dull. 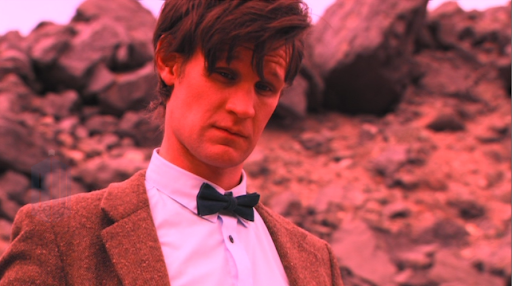 RTD also manages to reposition the situation of the "bad guy" of the piece; fleshing out the simplistic "take over the galaxy" trope and giving the Shansheeth a more complicated, almost understandable, edge to their plans. Likewise the Graske is reformed in the closely related, but quite different, alien the Groske (pictured below) - one can image these little guys coming back and being a great part of the team.

Although one could have had pretty much any kind of plot as the background to a story featuring The Doctor in The Sarah Jane Adventures with a former companion and UNIT, the production team or savvy enough to respect the audience and deliver appropriately with twists, turns and a very neat solution. 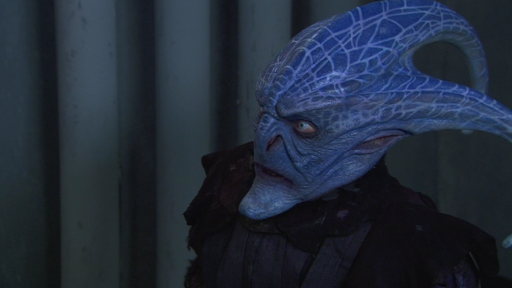 Death of the Doctor is not only immensely satisfying as a regular episode of the Doctor Who spin off, but this two~parter also entertains in a wholly remarkable way - dealing with death, nostalgia, friendship, acceptance and whole big dose of interplanetary hopping (Sarah and Jo's amazement at seeing a new planet again is a joy to behold) and "body switcheroo" action. Its scope is worthy of the big screen, as are the performances and visuals - or even a Saturday early evening slot on BBC One... 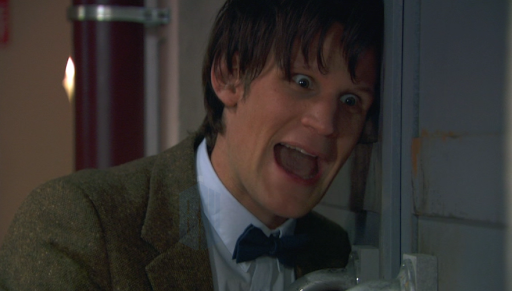 As a final note, I'd like to add that having Russell T Davies writing again for television reminds me just how much Britain needs his talents and, to a certain extent, has missed them. Nobody writes like him. Nobody delivers such lush broad strokes creating a canvas that both warns of the temptation of the past (or wading in nostalgia), whilst celebrating the lives of those who populated that very past with such effusion. The colour of his palette lights up every word, every character, every gesture; and fills the heart with unbridled joy at the world The Doctor participates in.
Death of The Doctor airs
Mon 25 & Tues 26 Oct on CBBC @ 5.15pm
Wed 27 & Thurs 28 Oct on BBC One @ 4.30pm 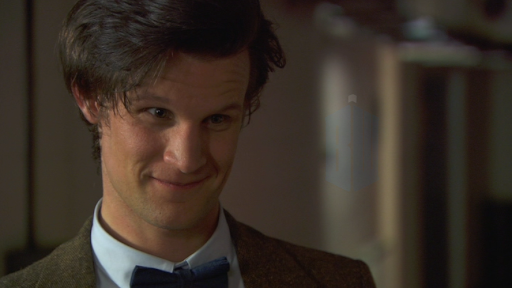 BLOGTOR RATING 9/10
Thanks to the BBC