AudioGO have announced news of three Doctor Who related releases in March, check out the details below. 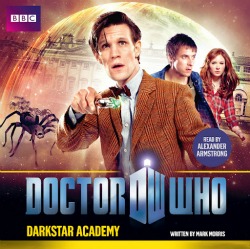 When the TARDIS is buffeted by ‘time slippage’, the Doctor experiences a terrible vision of the end of everything. Tracking the source of the disruption, he takes Rory and Amy to what appears to be an English public school in the 1950s.

But as the friends are about to discover, there are some very unusual things about Darkstar Academy. For a start the prefects carry guns, and then there is the strange forcefield that surrounds the perimeter. Not to mention the foot-long, crab-like creatures with spiny, armoured bodies...

When the Doctor learns the truth about the Academy, he also discovers that the whole place is in terrible danger. But with a swarm of creatures on the loose, what can he, Amy and Rory do to help prevent a terrible disaster? 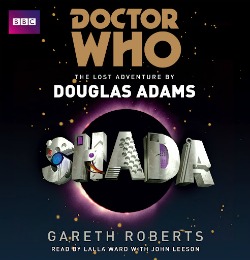 Thirty-three years ago, the BBC started filming Douglas Adams’ six-part Doctor Who serial, Shada. But industrial action halted recording, and the story was left unfinished… until now. Written by acclaimed Doctor Who novelist and screenwriter Gareth Roberts, it is based on Douglas Adams’ original scripts and read by Lalla Ward (who played the Doctor’s companion Romana). John Leeson, the original K9, returns as the voice of the Doctor’s faithful robot dog. The reading is enhanced with music and sound design.

The Doctor’s old friend and fellow Time Lord Professor Chronotis has retired to Cambridge University – where nobody will notice if he lives for centuries. But now he needs help from the Doctor, Romana and K-9. When he left Gallifrey he took with him a few little souvenirs – most of them are harmless. But one of them is extremely dangerous.


The Worshipful and Ancient Law of Gallifrey isn’t a book for Time Tots. It is one of the Artefacts, dating from the dark days of Rassilon. It must not be allowed to fall into the wrong hands. The sinister Skagra most definitely has the wrong hands. He wants the book. He wants to discover the truth behind Shada. And he wants the Doctor’s mind...
Available March 15: £19.69 (Download), £19.35 (10 CDs)
Playing time: 11 hrs 30 mins 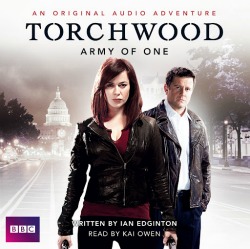 Torchwood: Army Of One
Read by Kai Owen

Washington D.C., post-Miracle. The city has been hit by a spate of very unusual serial killings. The victims are different ages and genders and the locations vary, but each body has one thing in common – it has been reduced to a dried-up, desiccated husk. Special Agent Lucas Avery has dealt with some tricky puzzles in his time, but this is stranger than anything he has ever encountered. His one lead is a pair of names: ‘Gwen’ and ‘Rhys’...

For Gwen Cooper and Rhys Williams, still recovering from the recent, traumatic events that shook the world, life is about to get difficult and dangerous again. For it’s not just Homeland Security on their trail, but something else – something alien, terrifying and deadly...