REVIEW: Day of the Cockroach 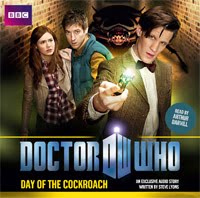 
Continuing their series of exclusive audio adventures for the current incarnation of the Time Lord, as played by Matt Smith on television, AudioGo deliver a tale from the Eighties from the "pen" of seasoned Who author, Steve Lyons. But it's not the Eighties as we know it.


"We're inside a nuclear bunker in Great Britain,
in the middle of an atomic war. And it's 1982!" 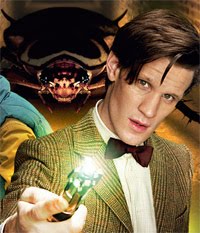 The Doctor, Amy and Rory find themselves inside a British nuclear bunker, in the middle of an atomic war in 1982. As you may have guessed, this isn't quite the history we're used to. The opening of the story is quite remarkable, sorry, incredibly remarkable; certainly worthy of the television series (and more memorable than some). It's an exciting and vivid start that lumps humour, scares and intrigue together in a most pleasing fashion.
It's the perfect start.


The rest of the story doesn't quite live up to the fascinating opener and it's surprisingly old~skool in its form; base under siege, The Time Lord and his chums get split up early on. If I were being lazy (perish the thought), I would say it evoked both Genesis of the Daleks (the oppressive state of wartime) and The Doctor's Daughter (claustrophobic tunnels and blustering old soldiers).
Despite the upbeat tone from The Eleventh Doctor throughout there's some nastiness in the form of the titular cockroaches and the devastation the beasts cause (one death scene in particular is particularly unpleasant). Amy, uncharacteristically it has to be said, displays some sympathy as she reflects on how her parents are coping in this 1982. It's a moving moment though fans will be wondering why she never displayed this familial tone with regards to her daughter. 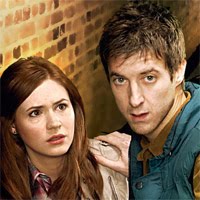 Full marks and a huge gold star must go to reader Arthur Darvill. The man behind Rory not only voices the narrative with a pleasant ear~stroking tone but he really dives into characters and their personalities fleshing them out neatly. His Matt Smith is on~the~nose, giving rise to his quirks and unusual style. Sadly, Darvill doesn't do his hilarious Karen Gillan "impersonation" and goes for a more subtle Scottish accent.
The production on Day of the Cockroach is also worth a mention, adding to the atmosphere with a fantastic array of sounds and menacing soundtrack. It's a cracking story, perhaps a little too long, that will amuse, scare and entertain in bucket loads. An immense addition to the series of exclusive audio adventures.

BLOGTOR RATING 8/10
Thanks to AudioGO