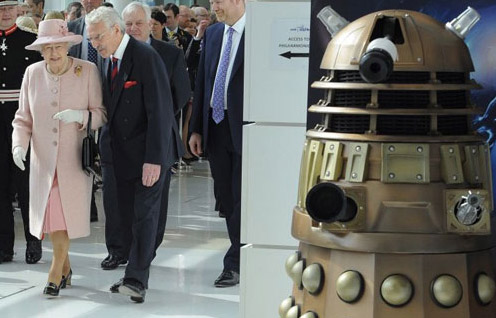 To celebrate The Queen's Diamond Jubilee, Blogtor has collated the ten best mentions/references/hints of her Madgeness* in Doctor Who - check 'em out below and raise a glass to Queen Elizabeth II! Apparently, she and her crew are big fans of the show, so I hope they enjoy this tribute.

10. Mawdryn Undead
OK, I admit it, this one is a bit tenuous (but I had to make the list up to ten somehow), but what better way to celebrate The Queen's Silver Jubilee than to do a story about it almost 6 years later. Yup, in those days, Doctor Who did things a tad differently. Her Majesty isn't directly mentioned but The Doctor knows the date precisely (that's June 7, 1977, fact fans), showing off his Queenie knowledge aptly. And just check out that bunting and tight t~shirts! 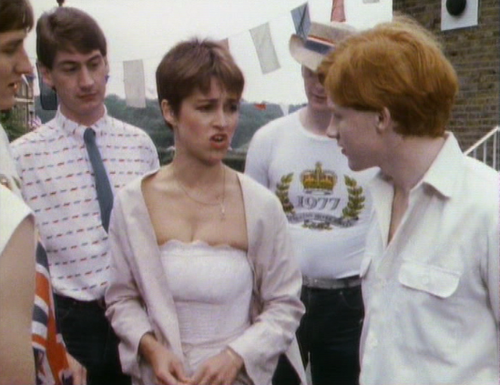 Slightly less tenuous (slightly) is this 2006 ep, which featured one of her predecessors, Queen Victoria, exploring the notion of "The Royal Disease" (insert "I didn't know taking everyone's money and doing nothing was a disease" gag here). Rose asks The Doctor, "So the Royal Family are werewolves?" after he suggests that the blood sport~lovin' nature of the Royal DNA may raise its head in the early 21st Century...
8. The End of Time [Part 1]
OK, now were' getting somewhere. Lizzie W didn't actually make an appearance in Davey T's swansong but she almost did (her "name" is visible!). And everyone's favourite old person Wilf even starting saluting her only to be replaced by, dun~dun~dunnn, Mumtor Who**! Of course, Queeny would have got her bonce transformed into that of John Simm but mere hours later. Which makes me wonder, did the stamps change...? 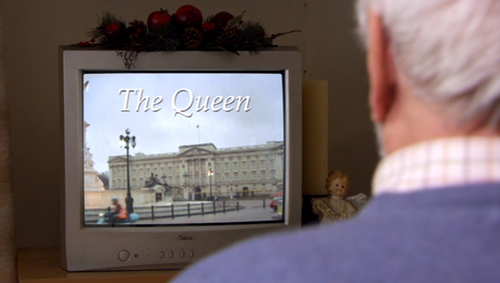 Again, a bit of an oblique, not to mention bleak, reference for the 2008 Doctor~lite episode (and one of my all time favourite stories, I should add) but I think we can assume that, as the Titanic crashed into Buckingham Palace, the head of the Windsors was involved in this parallel conclusion to Voyage of the Dammed. Killing The Royal Family may have seemed like a sequel to the film Titanic for poor Donna Noble, but RTD showed a rather macabre side to his normal Monarch~lurvin' stance. 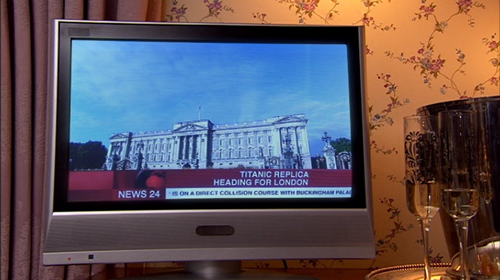 Not to be outdone by the former showrunner, Steven "SteeMo" Moffat produces his own Queen with a blink and you'll miss it reference (if ears can blink) to our current Monarch. Liz Ten reveals that The Doctor had "tea and scones" with our Betty. We don't know when in her life and we don't even know what incarnation of everyone's favourite Gallifreyan took the time to perform such a decadent act. Mind you, "tea and scones" does sound like a rather filthy euphemism... #durtyboy

5. The Christmas Invasion
"It's hardly the Queen's Speech, I'm afraid that's been cancelled..... Did we ask about the Royal Family? Oh, they're on the roof." Best. Queen gag. Ever. 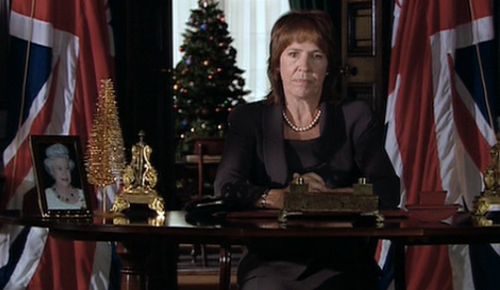 4. Planet of the Dead

This one came right out of left~field. After effing up a bus, flirting outrageously with a "Lady", chumming it up with some Tritovore and battling a swarm of metal exoskeleton stingray aliens (what the hell were they called??) on San Helios, The Doctor reveals his relationship with Her Queeny~ness. "Oh, she doesn't mind,"  he proudly boasts on UNIT returning the TARDIS after being found in the grounds of Buckingham Palace. Show~off.
3. The Idiot's Lantern

If it wasn't for the old Queen, this story wouldn't even exist (please keep the sarky remarks to yourself, please). According to one of the ladies watching the Coronation, Liz "Makes you forget all your troubles." Interesting, I was not aware of that. The Doctor's ironic utterance of "God save the Queen, eh?" was intriguing, however. Not sure who he was doubting - the former or the latter. Or maybe he was giving a nod to The Sex Pistols? 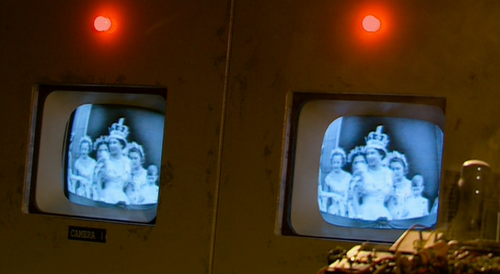 An actual sighting! This time Lizzy takes the dogs for a walk around Windsor Castle whilst The Seventh Doctor and Ace goof around in search for... hold on. Just why were they are? Oh yeah.*** Anyway, on first sighting, his confused, "I can't place that woman for the life of me!" turns to "She's just the woman we need!" as he feels the need for armed forces to overthrow the Cybermen, Lady Peinforte and some Neo~Nazis (I think that's what they were).

1. Voyage of the Damned

Another sighting! AND she gets some dialogue! But before that we get some discussion  of Highnessnessness. Wilf warmly responds, "Gawd bless her" (saluting, again; or for the first time, rather) in admiration of The Queen's decision to remain in residence at Buckingham Palace over the festive period despite all the beastly goings~on in London over the past few Christmases. The Doctor incorrectly chips in, "Her Majesty has got it right, as far as I know." (Mind you, his mind was probably a bit frazzled as he had Kylie on his arm.) 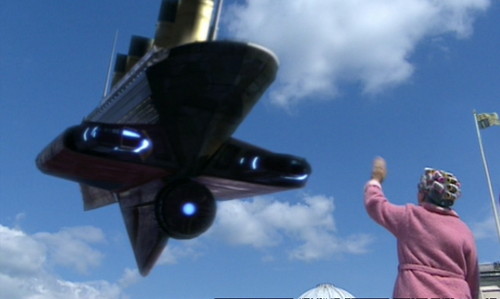 QE2's decision to show the people of the world that there was "nothing to fear" of extra~terrestrial intelligence was almost a bad move. Almost. Thankfully The Doc calls in a "Security code 771" (I wonder what the first 770 were?) from the Titanic to the palace  - cue corgis, the Royal slippers and rollers. But, there's more. We even hear from Her Madgeness as she shows her appreciation for the Time Lord, "Thank you Doctor, thank you. Happy Christmas." What a classy gal.
CHECK OUT MORE LISTS HERE!
RECENT POSTS
John Simm interview
Good As Gold mini~episode
Billie Piper in True Love
Doctor Who: The Wheel Of Ice
The Impossible Planet/Satan Pit commentaries


Labels: * Majesty, ** yeah you read correctly, *** something to do with the ark of the convenant or something like that, queen in doctor who, the queen in dr who