Doctor Who: The Wheel Of Ice

BBC Books have announced the forthcoming publication of Doctor Who: The Wheel of Ice by Stephen Baxter, an all-new Doctor Who adventure starring The Second Doctor, as played by Patrick Troughton, with his companions Jamie and Zoe. Synopsis below:


DOCTOR WHO: THE WHEEL OF ICE
Resilience. Remembrance. Resolution. Whatever the cost. 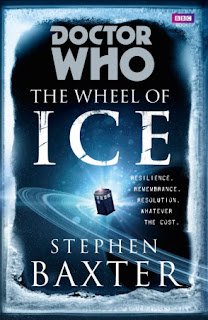 She had no name. She had only her mission - she would return Home. And bathe in the light of a long-dead sun... Even if it meant the sacrifice of this pointless little moon to do it. The Wheel of Ice: a ring of ice and steel turning around a moon of Saturn, home to a colony mining minerals for a resource-hungry future Earth. A bad place to grow up.

The Wheel has been plagued by problems. Maybe it's just gremlins, just bad luck. But what's the truth of the children's stories of 'Blue Dolls' glimpsed aboard the gigantic facility? And why won't the children go down the warren-like mines? And then sixteen-year-old Phee Laws, surfing Saturn's rings, saves an enigmatic blue box from destruction. Aboard the Wheel, The Doctor, Jamie and Zoe find a critical situation - and three strangers who have just turned up out of nowhere look like prime candidates to be accused of sabotage ...

_____
Stephen Baxter is recognised as one of the world's foremost science fiction writers. Since 1987, he has published over forty books, mostly science fiction novels, and over a hundred short stories. He is also collaborating with Discworld author Terry Pratchett on a series of science-fiction novels.