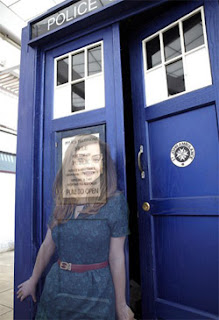 The latest issue of Doctor Who Adventures (No. 269, out in the UK tomorrow), has revealed some new info about the upcoming series and the 2012 Christmas Special. Here's what magazine for younger fans had to say in their Series 7 Rumour Alert! section:

This series will build up to the exciting 50th anniversary of Doctor Who - expect something HUUUGE!

Mark Gatiss (the writer of Night Terrors and Victory of the Daleks) will be returning to write an episode.

Will the Christmas episode feature a spooky ghost?

Alex Kingston has been spotted filming, so get ready for the return of River Song

Blogtor's Guide to Doctor Who Series 7

The 2012 Christmas Special will be the first to feature the new companion as played by Jenna-Louise Coleman. Filming begins shortly on the story.