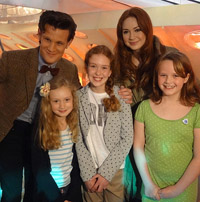 CBBC children's show Blue Peter today included the winning entry for this year's Script To Screen competition run by the BBC. Starring Matt Smith as the Doctor and Karen Gillan as Amelia Pond, the Olympics-inspired story was filmed at BBC Wales Roath Lock studios in Cardiff and was created by three talented pupils from Ashdene Primary School in Wilmslow.
The three-minute winning script was chosen by Steven Moffat, lead writer and executive producer of Doctor Who, Katy Jones BBC Learning executive producer and Caroline Skinner, executive producer of Doctor Who. Skinner praised the quality of the scripts, saying: “We loved reading all of the scripts from schools across the UK and the standard of entries was truly outstanding. It was a difficult, but a tremendously fun task to choose a winner and it was just brilliant to see so many children being creative in developing an adventure for the Doctor. We hope all fans enjoy this special one-off mini episode!”
You can watch the Doctor Who mini~episode, titled Good As Gold, in the player above and watch some behind the scenes footage, including interviews with Matt Smith, Karen Gillan, Marcus Wilson and Caroline Skinner, below.
RECENT POSTS