REVIEW: Death to the Daleks DVD

DEATH TO THE DALEKS
Starring Jon Pertwee and Elisabeth Sladen


STORY
Regular Blog~a~trons and Twitter~ites will be aware of my disdain for the intergalactic pepper~pots so perhaps you might want to troddle on towards the Extras section if you're a fan of Skaro's finest. The Daleks don't really do it for me and I vehemently disagree with those who say that they are intrinsic to Doctor Who. For me, the exterminating entities just highlight the flaws of the show (a returning villain who never learns, or wins).

Anyway, I am not reviewing Dalek history here. I'm looking at their final telly outing with Mr Pertwee, Death to the Daleks. Which is also their last before the introduction of Davros (and it would be another thirty years or so before the little guys would get a story without their creator).
The opening fifteen minutes or so are quite remarkable with a wonderful scene with The Third Doctor and Sarah Jane Smith (with Lis Sladen revealing a lot of shoulder) discovering that even the TARDIS was susceptible to power cuts (something that was actually happening in the UK at the time). We then a find an eerie and incredibly atmospheric evocation of the planet they find themselves on, Exxilon. 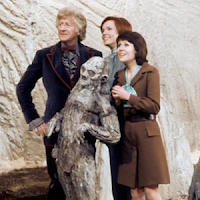 Sadly, the rest of the story doesn't quite live up to the opening but there's still much to enjoy. The notion that the Daleks are impotent (due to a weapons malfunction) is solid and allows them to become slightly more interesting than unusual. Slightly. It has to be said, the "salt shakers" could have been replaced by any kind of nasty and they certainly don't come off too well. Notably the scenes where they're twitchy and fidgety, coming off a tad comical (and let's not chat about the "self destruct" Dalek...).
But they fare better in other moments, notably the iconic moment where one is on fire, and the Daleks are utilised well by director Michael Briant who inserts some dynamic POV shots from the pepperpots. Briant, by then a seasoned Who~er, lends some neat, and almost gritty, style with further POV shots and handheld camera work throughout. His skills are called upon mainly due to the typical nature of Terry Nation' script - a man of action rather than words. Visually, Death has its moments but the characters, for the most part, are an unmemorable bunch; well meaning and earnest, and a bit dull.

However, there are some very engaging ideas at play here too - the loss of power in the TARDIS (and the power lacking in the Daleks) mirrors the era in the UK and the living city (a notion that really should have dominated the story). Its demise at the denouement is well played with some haunting sounds as it deteriorates.
My main beef with the story, apart from the nonentity of a cliff~hanger in Episode Three, is the music. At almost every point possible, the score undercuts the drama rendering whatever's going on laughable. In particular, it would seem that the composer (Carey Blyton) thinks that the Daleks are some kinda sitcom characters with jaunty bassoons every time they appear. Oddly, that very score is available as an isolated track elsewhere on the DVD. (Presumably for those who appreciate a larf.) 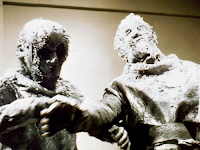 Voice of the domed despots Nick Briggs describes this as a "great Dalek story" on the Extras and I would really have to take him to task on this description. It's not. Interesting, yes (and thankfully it was kept to four parts) but great? Hardly. A cursory glance at the Top 200 stories in Doctor Who Magazine would suggest that fans also think it's rather humdrum (with only two Dalek stories beneath it). Acceptable would be the best adjective (and spoken like a Dalek). Acceptable. 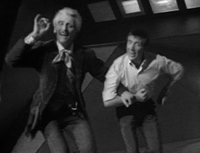 I would normally kick off by looking at the main "making of" documentary but I simply had to draw your attention to one of the most memorable, though understandably short, special features on the classic DVD range. Its title, On the Set of Dr. Who and the Daleks, pretty much says it all. This featurette has some incredibly rare snippets of behind~the~scenes footage from the first Dalek movie starring Peter Cushing and Roy Castle. In fact, the clips presented are off~cuts from a contemporaneous "making of" for UK television (no longer available).
Filling in the gaps are the director's son, and well known actor, Jason Flemyng (Clash of the Titans, X-Men: First Class); who speaks so effusively about his father, Gordon Flemyng, that his interview cannot fail to elicit a warm glow. (Psst SteeMo, get him on Who!) A great little piece and a tremendous shame we don't have the original TV programme (which, like a great many loved things, has been lost).

The main docco, Beneath the City of the Exxilons, is yet another stylish affair from BAFTA~nominated Chris Chapman who has managed to rope in an actual Dalek to complete the narration - the cheeky beggar. Voice artist Nick Briggs leads the way in his appreciation of the story though the cast and crew are on hand to give an objective opinion too. Lovely to see actors Arnold Yarrow (who plays the diminutive Bellal) and Julian Fox remember their time fondly along with director Michael E Briant, who is on top form again. And top marks for the Dalek~y graphics which punctuate the piece.
Accompanying these top two trinkets is another gorgeous nugget - some outtakes from filming on the four~parter. Highlight, for me, was watching the Time Lord fiddle with his hair in between takes. Classic Pertwee action! Clocking in at twenty minutes, or so, it's maybe one for hardcore fans but a delight nonetheless. 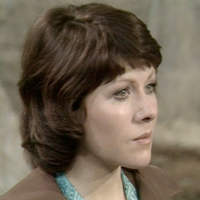 Fans will also find cheer in Dalek Stories, lifted from the BBC's The Story of Doctor Who (2003), where John Scott Martin raises a smile and a giggle with his potty professor persona.

The audio commentary (including director Michael E Briant, actor Julian Fox, assistant floor manager Richard Leyland, costume designer L Rowland Warne, special sounds maestro Dick Mills, Dalek operator Cy Town and moderated by Toby Hadoke) is a most enjoyable affair with never a dull moment as the gang reminisce and compare experiences. There are a few moments of cross over with the main doc, with regards to these stories, but this is only to be expected using the same personnel.

Indeed, if I have a criticism (and I do), it's a familiar gripe. There's no Sladen or Pertwee present at all. No voice from the show's two stars; no archival footage or quotes. A tad regrettable. For me, it helps the completeness of a story's representation to have the main players involved. Anyway, a small point but one I feel I have to make (and not for the first time).

Have to say though, extra special kudos to the Production Subtitles - I was introduced to the word "parlously". #applause
Whilst the main feature may suffer a little from what is known as in the Whoeuvre as both Dalek and Pertwee fatigue, the whole Death to the Daleks package certainly is as fresh and as vibrant as we've come to expect from the classic DVD series.