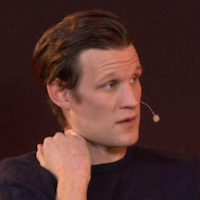 Earlier this month, popular actor Matt Smith made an appearance on the Regent Street Apple Store in London and the podcast is now available HERE (in both audio and video form). Talking about the Doctor Who 50th Anniversary Special, he promised:


"You won't be disappointed. I think it's the best ever, ever.
It's funny, it's so funny."

When asked if it was one special or a series of specials, Matt replied:

"It's one one-off piece but there are elements to it which are different to normal episodes. When you combine all the elements that are different, it's not just an episode of Doctor Who, it's something else; something bigger and greater and more exciting. "

During the audience Q&A, when prompted, the actor stated:

"I think you might laugh more than you'll cry. But, you know, there might be a bit of crying in there. Actually there is one moment where you might shed a tear."