The BBC have confirmed more episode titles from Doctor Who Series 7 Part 2. Starting with The Bells of Saint John (airing on March 30 in the UK and North America), it is followed by The Rings of Akhaten (written by Neil Cross), Cold War (Ice Warrior story from Mark Gatiss) and Hide (Neil Cross). Check out the synopsis for each episode below.

The Bells of Saint John
The Doctor’s search for Clara Oswald brings him to modern day London, where Wi-Fi is everywhere. Humanity lives in a Wi-Fi soup. But something dangerous is lurking in the signals, picking off minds and imprisoning them. As Clara becomes the target of this insidious menace, the Doctor races to save her and the world from an ancient enemy.

The Rings of Akhaten
Clara wants to see something awesome, so the Doctor whisks her off to the inhabited rings of the planet Akhaten, where the Festival of Offerings is in full swing. Clara meets the young Queen of Years as the pilgrims and natives ready for the ceremony. But something is stirring in the pyramid, and a sacrifice will be demanded. 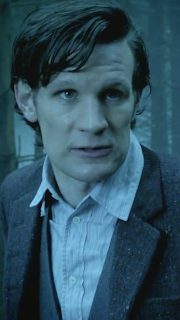 Cold War
The Doctor and Clara land on a damaged Russian Submarine in 1983 as it spirals out of control into the ocean depths. An alien creature is loose on board, having escaped from a block of Arctic ice. With tempers flaring and a cargo of nuclear weapons on board, it’s not just the crew but the whole of humanity at stake!

Hide
Clara and the Doctor arrive at Caliburn House, a haunted mansion sat alone on a desolate moor. Within its walls, a ghost hunting Professor and a gifted psychic are searching for the Witch of the Well. Her apparition appears throughout the history of the building, but is she really a ghost? And what is chasing her?