THE DALEK GENERATION
by Nicholas Briggs

Nicholas Briggs needs no introduction to fans of Doctor Who.  But in case you’re not familiar, Briggs is an important member of the Doctor Who universe; the Whoniverse, if you’re that way inclined. He not only provides the voices for the Daleks, the Cybermen and, more recently, Ice Warrior Skaldak in the television series, he also acts in and writes for a number of spin-offs.

Before reading The Dalek Generation, I noted with interest that during a documentary for the “Special Edition” DVD of The Visitation, Russell T Davies said, “I always regret that we never asked Nick Briggs to write a Doctor Who script.” Praise indeed from RTD. [You can read the news article HERE - Ed.]

So how does The Dalek Generation fare against such an illustrious background? Well, let’s break the book down into a traditional three-act scenario. The prologue and the early chapters are an absolute joy. Written with what is clearly an enormous knowledge and love of Doctor Who, the words tell a delicious tale, not only in its own right, but bringing with them the full weight of the programme’s history.

Briggs brings the Eleventh Doctor, played on television by Matt Smith, vividly to life complete with all his verbal and physical idiosyncrasies and introduces new characters you instantly care about. The Dalek Generation sees the Doctor taking three orphaned children, Sabel, Jenibeth and Ollus Blakely, under his wing as he tries to unlock the mystery of the Sunlight Worlds, a collection of planets set up by the seemingly benevolent Dalek Foundation.  However, the Daleks have discovered what could be the most dangerous weapon in the Universe, the Cradle of the Gods, and they need the Doctor to unlock its power.

Faced with worlds inhabited by people who believe the Daleks to be a force for good, the Doctor is frustrated at every turn in his attempts to expose the Daleks as the warmongering, hate-filled race he knows so well.  And this is where the Doctor’s frustration echoes that of the reader. Halfway through, into the second act, The Dalek Generation becomes something akin to a trip on a budget airline to, let’s say, Tenerife. The anticipation is quite exciting, but the journey itself is somewhat unsatisfying and goes on for a bit longer than you’d really like it to. And the final destination is slightly underwhelming. 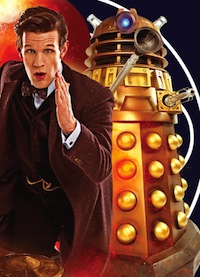 It’s all jolly nice to have a mystery to solve, but a clue or two along the way would be nice. With this story, it’s only at the very end that we have any real answers and the big finale is the biggest frustration of all as Briggs wheels out a deus ex machina ending that’s almost as frustrating as the chapters that precede it.  Sometimes everybody lives, yes, but sometimes it’s more fitting for a story that they don’t. This is perhaps one of those times.  And one particularly interesting character is just plain never seen again.

But it’s not all frustration. The Dalek Generation has plenty of fan-pleasing moments, such as the return of the Dalek puppet, last seen in Asylum of the Daleks, and some brilliantly realised characters, including an enjoyable new alien race, the Kletids. It also features the disturbing and incongruent Dalek Litigator, who it transpires is the Dalek Time Controller, an evolved strategist who has appeared in audio adventures facing the Sixth and Eighth Doctors.  Every new character is vividly drawn and interesting, and Brigg’s love of the show oozes from many a line.

So did RTD make a massive boob by not employing Nick Briggs to write an episode for TV?  Based on this story, perhaps not. Lots to enjoy, but a sometimes exasperating ride for the reader.


BLOGTOR RATING 6/10
Thanks to Broadway Paperbacks