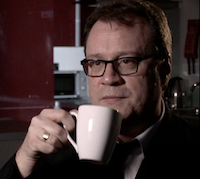 In the audio commentary for The Sarah Jane Adventures story Death of the Doctor - released on next month's DVD release of The Green Death: Special Edition - Russell T Davies states that one of the show's main characters, Sarah Jane's son Luke (played by Tommy Knight), was to have been gay should the show have continued. Speaking on the commentary, he reveals this information for the very first time with even some of the show's writers in the dark about the info. On the commentary for the story starring Matt Smith (The Eleventh Doctor) and Katy Manning (Jo Grant), Russell says:

"Tommy [Luke Smith] refers to his friend Sanjay. Now had we continued, Sanjay would have been Luke's boyfriend. Because children's BBC [CBBC] wanted to have - I've never said this in any interview anywhere - wanted us to have a gay character on children's BBC. Just a normal gay character."

"And so they said to us, 'Can you do that with [The] Sarah Jane [Adventures] and, I don't even think some of the writers on the show know this, because obviously we got taken off air sadly. Tommy [Knight, who played Luke Smith] wanted to come back into the show and we were going to approach him and say, 'Do you mind if he's gay and has a boyfriend?' So that was the plan, because of Steven Andrew [then Head of Drama and Acquisitions for CBBC] wanted it but it never came to pass. Isn't that sad? It's a shame."

Russell went to to reveal that a filmed line hinting at Luke's homosexuality was taken out of the Joe Lidster story, The Nightmare Man (review HERE); the former Who showrunner says:

"In the very last scene he says goodbye and Sarah Jane says, 'Have a lovely time at university. You'll grow up, you'll find a girlfriend,' and he says, 'Oh, could be a boyfriend!' And she goes, 'Well, as long as it's not alien, I don't care!' We ended up cutting it."*

Russell also talks about Matt Smith, stating the outgoing Doctor Who, is "amazing".

The Death of the Doctor audio commentary includes much more fascinating and hilarious insight into both The Sarah Jane Adventures and Doctor Who from Russell T Davies and Katy Manning. It is released on The Green Death: Special Edition DVD, out on August 5 (full details HERE).

The same DVD set also includes a documentary with stunning revelations on the show's return in the Noughties - read them HERE.

*UPDATE: Lovely writer Joe Lidster has been in touch to clarify the line was actually: "As long as it's not a Slitheen, I don't care!"