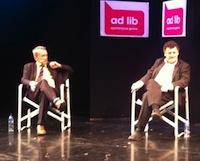 Current showrunner Steven Moffat was talking with Frank Skinner and Fred MacAulay earlier this evening at the AdLib Comedy event in Edinburgh. During the session both Doctor Who and Sherlock were discussed and there was also a Q&A with the audience. Highlights below!

What are the chances of Peter Jackson directing an episode?
"He's serious about it. We talked at The Hobbit premiere - he just wants a Dalek. So we'll give him a Dalek and he'll direct an episode. I think he'd like to us to go to New Zealand. I think it's entirely possible."

Rumour that JK Rowling is writing a short story for the 50th Anniversary.
"I can't confirm that..., right now."

A return for the Doctor's daughter, Jenny?
"The door is open, it's entirely possible."

Similarly, a return for Romana?
"I have actually given no thought at all to Romana. The Time Lords are dead in my mind. They died."

Will Peter Capaldi's Doctor have a Scottish accent?
"I'd be very surprised if he didn't"

Regarding the casting of an older actor being cast as the next Doctor (Peter Capaldi, in case you'd forgotten), Frank Skinner suggested: "I hope it will stop Steven's temptation to make it all flirty between The Doctor and the companion," to which Steven Moffat replied sarcastically, "Yeah, 'cos older blokes - they just don't ever flirt with girls, do they?" Skinner also suggested that Dorium Maldovar would be a brilliant companion. "You really do want to reduce the flirting! I love the character. We would bring him back if we had a good story for him. But he's just a head in a box, which could make it slightly limiting. [Laughs]"

On the Sherlock Series 2 finale...
"He cunningly avoided the pavement - that really is the only way to avoid dying. There's only a limited number of ways he can do this. He's got to interrupt his fall before he hits the pavement." Moffat also revealed that the first episode of the next series is set in November.