Speaking to Flicks And The City, actress Neve McIntosh has revealed that her character, Madame Vastra, will return to Doctor Who next year alongside the new Doctor, and fellow Scot, Peter Capaldi. 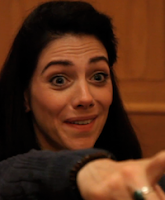 McIntosh revealed: “It will be sad not to be working with Matt again but I’m really looking forward to Peter taking over and seeing what he does with it. We’ll be helping the Doctor more, but I can’t say anything else.”

Vastra will also return with Jenny and Strax but is keen to have their own spin-off show, exploring some more adult ideas, stating: “The sexual themes in Doctor Who should be talked about more and embraced more. It could be edgier and more dangerous. We can do so much in Victorian times, it’s got that steampunk edge to it. Think how freaky that era was with the Elephant Man and all that and just add us into the mix, with time travel and all sorts of weird, wonderful stuff.”

Filming on Doctor Who Series 8, starring Peter Capaldi as The Twelfth Doctor and Jenna Coleman as Clara, starts in November 2013. Watch the full Flicks and the City interview with Neve HERE.