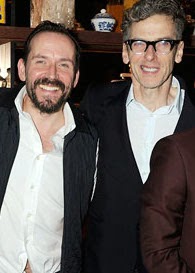 Actor Ben Miller, best known for his roles in Primeval, Death In Paradise and one half of the comedy duo Armstrong & Miller, has been revealed as another actor to join the cast of Doctor Who Series 8.

Miller will star as a villain in an episode written by Mark Gatiss (Episode 3) and told the BBC: "As a committed Whovian I cannot believe my luck in joining the Twelfth Doctor for one of his inaugural adventures. My only worry is that they'll make me leave the set when I'm not filming." The story is possibly Robin Hood-themed - details HERE.

Fact fans will also note that Ben starred with current Doctor Who Peter Capaldi on stage in The Ladykillers (pictured left).

Current showrunner Steven Moffat added: "Mark Gatiss has written us a storming villain for his new episode, and with Capaldi in the TARDIS, we knew we needed somebody special to send everybody behind the sofa. And quite frankly, it's about time Ben Miller was in Doctor Who!"

Producer Nikki Wilson tweeted: "Brilliant first day on set with the marvellous @ActualBenMiller - gonna be a stonking episode of #DoctorWho! Thank you @Markgatiss"

Miller's other half in the aforementioned comedy duo, Alexander Armstrong, has already appeared in Doctor Who twice: as the voice of Mr Smith in The Stolen Earth/Journey's End and as Reg Arwell in The Doctor, The Widow & the Wardrobe.