WARNING: This post contains spoilers for Doctor Who Series 8 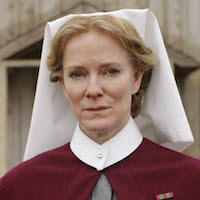 The BBC have released more details about the new series of Doctor Who. Joining the guest cast is actress Hermione Norris (The Crimson Field), pictured left. Speaking about her casting, she said, "It’s exciting to be part of such an iconic show, and one that my kids can watch!!!"

Current showrunner Steven Moffat commented, "It's a testament to the quality of Peter Harness's intense and emotional script, that we've been able to attract an actress of the brilliance of Hermione Norris."

Revealing more about the story SteeMo said, "And for the first time since 1984, the Doctor Who production team is heading to Lanzarote. The Doctor is returning to the scene of an old adventure - but there have been sinister changes since his last visit."

Lanzarote was last used in Doctor Who for filming on the Peter Davison "classic", Planet Of Fire. The episode is written by Peter Harness (Wallander) and directed by Paul Wilmshurst (Strike Back) and also stars Ellis George (who plays Danny Pink's sister), Tony Osoba (who will be familiar to fans having starred in Destiny of the Daleks and Dragonfire) and Phil Nice (who had a small part in Torchwood: Miracle Day).


Visit the Guide to Doctor Who Series 8 HERE