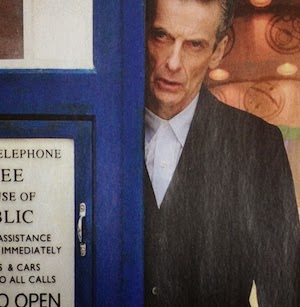 Current Doctor Who showrunner Steven Moffat has been chatting to Radio Times about the show and, specifically, Peter Capaldi.  He told the magazine:

"There is something about Peter's demeanour, his eyes, his attitude - he's tremendously bright and that comes out on screen. When you choose a Doctor, you want somebody who is utterly compelling, attractive in an odd way. None of the Doctors are conventionally attractive but they're all arresting."

Moffat added, "Peter is a man in his Fifties but is terribly boyish and young at times," whilst writer Mark Gatiss also commented that Capaldi's Doctor is, "a more dangerous, more urgent Doctor. It has a side of crazy."

Turning his attention to The Day of the Doctor and John Hurt's "War Doctor", Steven said, "I think it's nice for a hero to have a dark chapter, although it's a chapter we will probably never see again because that somehow isn't Doctor Who."

On the Doctor Who 50th Anniversary special he recalled, "I remember sitting with my wife saying, 'I can't tell if it's good any more, it could be rubbish - I'll have to leave the country. I'll have to fake my own death.' And then going for a meeting with the producers the week I was meant to hand the script in, and we were still trying to assemble the cast. We just all sat there, thinking, 'This is impossible, this can't ever work!'"

Visit the Guide to Doctor Who Series 8 HERE