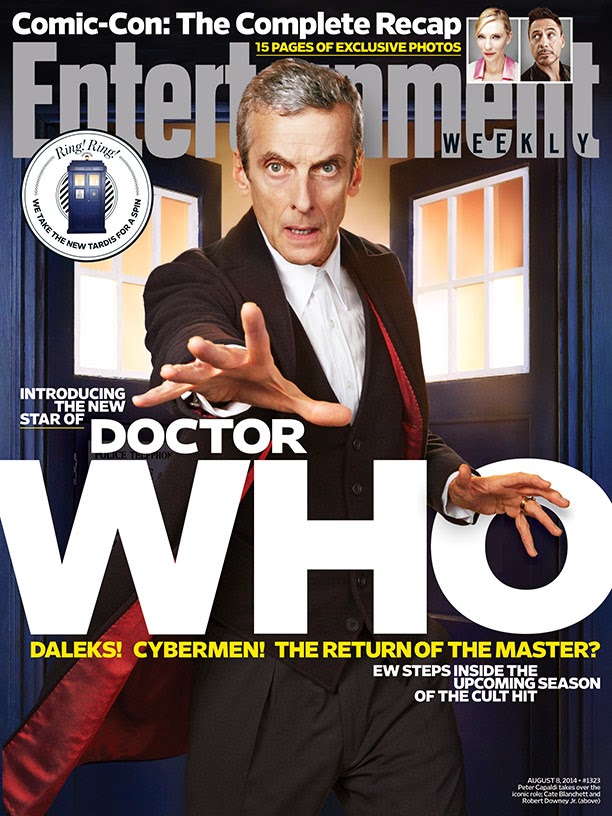 The latest issue of the US magazine Entertainment Weekly, out Friday, has a very special Peter Capaldi cover and feature inside. Check out the deets below and click on the image included for a bigger version.

Does this week’s issue of Entertainment Weekly defy the laws of physics by being bigger on the inside than it would appear from looking at its exterior? Fans of the British science fiction show Doctor Who may well think so. For this week’s cover story, senior writer Clark Collis travels to the UK to meet with Peter Capaldi, the new star of the now 51-year-old time travel saga, and to find out what fans can expect from the forthcoming season of Doctor Who, which premieres on Aug 23.


“He’s more alien than we’ve seen him for a while,”
says the actor, speaking about his version of the eccentric Time Lord.
“He is less patient with the foibles of human beings.”

Thankfully, the whole Who team were patient with EW‘s probing about the new, hush-hush season. In addition to Capaldi, Collis also spoke with the actor’s costar Jenna Coleman and showrunner Steven Moffat who tackled such burning as questions as “Will Capaldi’s previous appearances in the Who universe be referenced this season?” and “What will happen in the two-part finale?” Collis even got to drive the Doctor’s bigger-on-the-inside time- and space-ship the TARDIS and did so without busting anything which, according to production designer Michael Pickwoad, makes him a more careful temporal navigator than previous Who star Matt Smith (“He was very good at breaking things”). We also persuade Capaldi to talk about the old monsters he’d like his Doctor to face and offer a sartorial breakdown of the Time Lord’s many looks through the show’s half-century history. Never seen Doctor Who (and feel a bid daunted by that history)? Then feel free to peruse our guide to how you can get into Who.

For more on Doctor Who, pick up a copy of this week’s Entertainment Weekly, on stands Friday.

Visit the Guide to Doctor Who Series 8