Doctor Who: The Tenth Doctor #2

The second issue of this Tenth Doctor comic (read our review of the first HERE), which sees the introduction of new companion Gabby, is packed full of new monsters and creatures; there’s the Thing, the Pranavores and the Cerebravores and they’re all rather interested in a Brooklyn Laundromat…

Despite an action-packed set piece that sees the Doctor and Gabby fleeing the demonic Thing through a subway car, I found the huge sections of exposition rather wearing. There’s also a lot of technobabble along with the constant explanations to what’s happening, which I think works better on screen than it does in pen and ink.

The writers have captured Tennant’s speech pattern again nicely and there’s a lovely reference to a much-loved First Doctor story. Gabby is very feisty and a quite nervous companion so although you don’t immediately warm to her, it’s nice to see The Doctor taking his time getting to know her and not handing her a key to the TARDIS straight away. She’s also quick-thinking and saves the day in a very Rose-like fashion so I’ll be interested to see how her character develops. 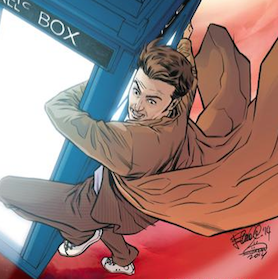 The subject matter of Revolutions of Terror plays with ideas of fear and negativity, which means the overall tone, as well as the artwork, is very dark and melancholic.

However, there’s another exciting cliffhanger and I’m hoping by the next issue, we will have got the heavy-lifting out of the way and it’ll be more enjoyable.