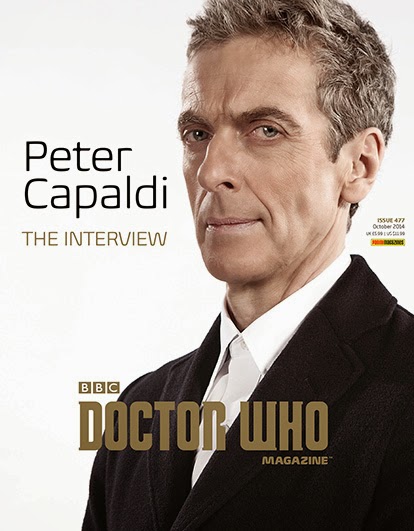 The latest details and artwork for the latest issue of Doctor Who Magazine (out tomorrow!) have been released. Check it below and click on the images for bigger versions.

In a bumper-sized 100-page issue, DWM catches up on set with the PETER CAPALDI –  the new Doctor Who. Doctor Who Magazine asked Peter how he has gone about making the part of the Doctor his own:

"Well, you begin with yourself. You begin with those elements of yourself that you feel would be at home in the role. There's an old actors' adage that you don't become the role, the role becomes you. It's trying to find those parts of you that will fit with the Doctor, and understand those bits that don't come so naturally to you, that you have to fabricate. I kept looking for people in my life who I thought had elements of the Doctor about them, and were inspirational in some ways. I composed a list of those..."

"Also, it's recognising what's been written. My Doctor is written slightly differently from some of the other Doctors, and the Doctor changes quite dramatically from episode to episode. Some demand more of your comedy chops, graver or more serious episodes demand a more sombre creature. All these variations have to live in the same body, in the same face. Putting all that together is tricky..." 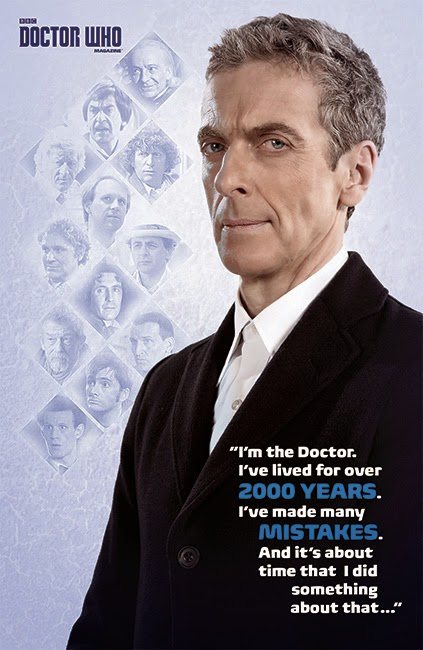 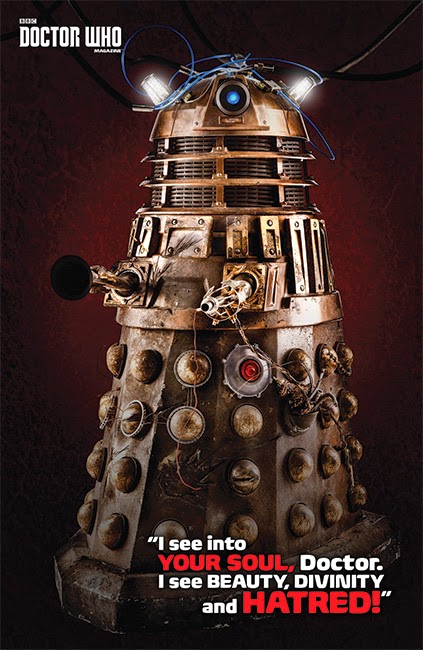 ALSO THIS ISSUE:
·     Read extensive previews of the first four episodes of the new series – Deep Breath, Into the Dalek, Robot of Sherwood and Listen – as DWM talks exclusively to writers STEVEN MOFFAT, PHIL FORD and MARK GATISS.
·     Doctor Who showrunner STEVEN MOFFAT answers readers' questions and reveals more behind-the-scenes secrets in his exclusive column.
·     DWM reunites former Doctor and companion team TOM BAKER and LOUISE JAMESON with their producer, PHILIP HINCHCLIFFE, to chat about the new Doctor Who adventures that they're working on, and reminisce about the 1970s adventures.
·     LOUISE JAMESON writes a very special letter to herself, exclusively for Doctor Who Magazine.
·     The Fact of Fiction takes a detailed look at the 1964 First Doctor adventure, The Reign of Terror.
·     Legendary writer TERRANCE DICKS talks about his later work on Doctor Who – and what he thinks of the series today.
·     Official news, the DWM crossword, prize-winning competitions and much more!
·     PLUS! A giant, double-sided poster, featuring Peter Capaldi as the Doctor! (Pictured above.)