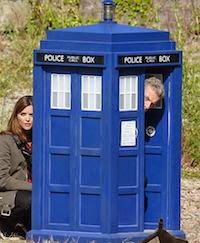 An article in today's The Guardian has revealed some interesting details regarding Episode 9 in Doctor Who Series 8. Read the full piece HERE and check out a gallery of pics for filming on the story HERE. Spoilers follow.

In a small studio a few corridors away, director Douglas Mackinnon is filming a sequence in which a chintzy sofa gets crushed out of existence. This will be the ninth episode, in which Jenna Coleman's Clara must lug the Doctor and his Tardis around in her handbag after they get shrunken down to miniature size. As proof, two tiny Tardises stand side by side on a nearby table.

Current showrunner Steven Moffat has also said about  the story, written by Jamie Mathieson, "It's a horror story. It starts off with a very cute idea and becomes really quite frightening by the end. A scary one."

Doctor Who Series 8 Episode 9 airs on Oct 18. Check out the guide to Series 8 HERE.

ETA: This episode is titled Flatline.

5 of the greatest Doctor performances in a first episode