Tom Baker celebrated his 80th birthday in January 2014. In March he sat down with Nicholas Briggs (the voice of the Daleks) to look back on his younger days, his time playing Doctor Who and his return to the world of Who with the Big Finish audio adventures.

One day back in 1997 I was wandering around a book shop in Mold (it’s a real place) at the same time that Tom Baker happened to be there signing copies of his autobiography Who on Earth is Tom Baker? I was practically broke at the time, but I dished out the money for my gas bill to buy the book, signed by the man himself. It seemed sad for me at the time to see the man who’d played one of television’s most iconic roles flogging books in Mold.

Who on Earth is Tom Baker? was like nothing I’d ever read before and I wondered a lot if any of it was the actual truth. But then I suppose that’s part of the ongoing appeal of Tom Baker; his storytelling is so wonderfully exuberant that whether any of it is really true doesn't really matter. Seventeen years on and Tom Baker at 80 begins with him telling Nick Briggs, “I’m dramatising and exaggerating things,” when reminiscing about a time when he could tie his own shoe laces. And this may or may not be true the whole way through this two-hour interview. Baker frequently tells Briggs that fellow cast members hated him, which you never quite believe especially when they’re followed up by tales of hitting the town with fellow thesps like Joan Plowright and Larry Olivier -  “Larry called me ‘baby’”. 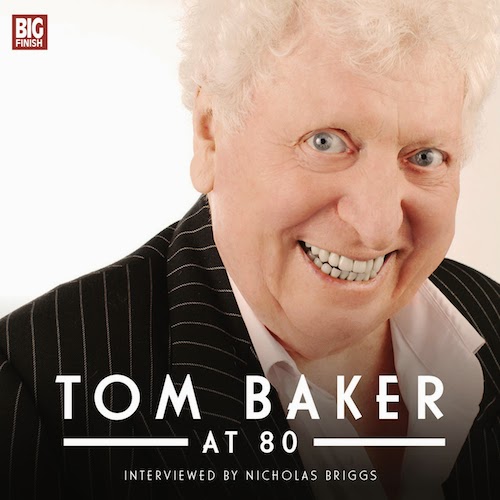 Briggs proves himself a rather lovely interviewer as he gently guides Tom through his own life, which is no mean feat as Baker is often (as you’d expect from a man of 80) vague about some events and loquacious about others.

We hear about his childhood in an impoverished, but fervently Catholic, family in Liverpool, where the love of his mother gave him a solid base against a religion that told him he was nothing. And that struggle against insignificance moves him from life as a trainee monk to army medic to actor, which in the context of this interview, seems perfectly reasonable and not the least bit odd in any way.

One of the great joys of spending time with Tom Baker is his charmingly peculiar view of life and the world around him. He seems to delight in the perverse, such as, “I liked his megalomania!” when talking about having champagne and tapas with Hollywood producer Sam Spiegel, or when revelling in Jon Pertwee’s lack of irony.

One of the key things about turning 80 is the time to reflect on a long life lived. Baker swears he’s learned nothing and yet Briggs brings out some interesting introspections about regrets or things that Baker would do differently.

Generosity is a trait that Baker often refers to in others and yet the most generous of all seems to be Baker himself as he talks about fellow actors, collaborators, or party-givers, while playing down his own achievements. Asked about playing Doctor Who, he simply says that he read some silly lines and people liked it. He talks with great affection about Paul Schofield and David Warner as well as fellow Who alumni Elisabeth Sladen and Louise Jameson. He has particular admiration for the very lovely Petey D and all of the other actors who’ve played our favourite Time Lord from Gallifrey, “No-one has ever failed at Doctor Who”.

Of course, Tom Baker at 80 also has some fantastically entertaining tales, too, such as being envious of Donald Sinden’s success with the check-out girls in Waitrose or being spotted playing a dog in Scarborough, which led to playing a horse at the National Theatre.

And we can’t end without talking about Tom Baker’s most iconic role. His love of Doctor Who and his passion for the show and the people who make it is extremely moving. He talks affectingly about his great unhappiness at leaving and his rejuvenation on joining Big Finish as well as his experience at the 50th Anniversary celebrations in London, “I’d never had a reaction like it.”

Tom Baker at 80 is filled with charm and affection. If the man wanders off at times, then we can certainly forgive him. Briggs brings him back and the story of Baker’s mad and endlessly interesting life flows very pleasingly. Like the man himself at 80, it is vague at times, but but filled with brilliant stories, lovingly told. And unlike his 1997 autobiography, you get the feeling that his glorious tales are mostly true.