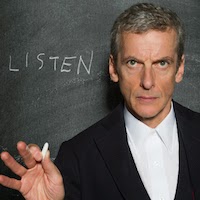 I should say that although this is a spoiler~free preview, there are some points about this episode that might be spoilery for some. But if you've seen the recently released promotional pictures from the BBC then don't worry, read on without fear.

Though the Next Time trail for Listen gave the illusion of this being the "spooky" episode, there's much humour to be found here. Peter Capaldi, despite walking around the TARDIS alone talking to himself like a loon for a lot of the story, gets a number of belly laughs - mainly at the expense of co-star Jenna Coleman.

Clara is finally going on a date with handsome man Danny Pink, though things don't quite go to plan (well, it IS Doctor Who after all). The Doctor, on the other hand, obviously has a lot of time on his hands and debates and explores the notion of a creature that could perfect the act of hiding. Something is haunting everyone's dreams, apparently, and the Time Lord is oh-so curious; questioning if we are ever really alone...

And, without wanting to use the word "tropes", there are a couple of very familiar Steven Moffat tricks/ticks going on here - through some timey~wimey fun, everyone's favourite Gallifreyan and Clara end up at various time zones in the past (recent and incredibly distant) and future. If you've seen the promo pics you'll see that Samuel Anderson is playing man from the future Orson Pink, a descendant of Danny.

Anderson is terrific in these dual roles and Mr Pink is fitting in to Doctor Who superbly, proving to be adept at the comedic nuances of his contemporary character and the more sombre facets of his future Robinson Crusoe. His soldier history is again broached. 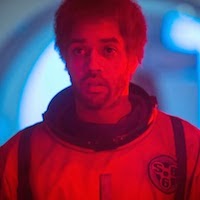 Interestingly, Clara takes charge once more and this series has seen a huge shift in the portrayal of the character. In fact, The Doctor's companion asserts authority in a seismic way in terms of the mythology of the show. And this brings me to one of the more contentious issues in Listen.

A very, very brave move from the current showrunner. Ultimately, though, a move that will upset and irritate many.

But, let's go back to where this preview started - scares. Listen is dense with atmosphere and full marks to both director Douglas Mackinnon (who previously helmed eps such as Cold War and The Power of Three) and composer Murray Gold for creating such a mood. Throughout the ep, their talents are evident.

In particular, there's one scene that will have younger viewers scampering away from the telly at great velocity. It's brilliantly executed and shiver-making in the extreme. I'll wager, there's also a few adults that may be also be sleeping with the lights on later that night.

Listen, like Deep Breath before it, is slower in pace and takes its time within the scenes, exploring the characters and the reality of fear and this unseen monster in everyone's lives. At times it may feel like a retread of the concepts first seen in Blink or with The Silence (and there's even another nursery rhyme thrown in for good measure to complete the Moffat-isms) but this is an intriguing instalment, and one that will ruffle feathers.