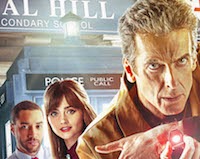 THE CARETAKER
by Gareth Roberts and Steven Moffat

The very talented Gareth Roberts returns to Doctor Who, after taking Series 7 off (you were missed!), joining an elite club who have written for three different Doctor Whos on television. And, I’m very happy to say, Roberts does a superb job, yet again.

After a super fantastic pre-titles sequence (shan't spoil but it's a hoot), we quickly discover that The Doctor has gone undercover - "deep cover," as he calls it - to Coal Hill School where something nasty is lurking (more of that later). Of course, you'll know by now that this entails the Time Lord becoming the school's caretaker, much to the chagrin of Clara, who has been trying to keep her not-boyfriend and boyfriend apart. 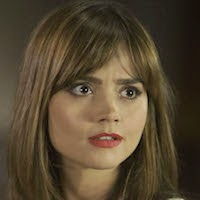 Eventually, The Doctor has to reveal his plans to thwart the threat but that's not all that's revealed as the Gallifreyan comes face-to-face with Danny Pink. And what a meeting it is.

It has to be said, the Time Lord is more than a tad ungracious towards the maths teacher and downright patronising and mean at other times; putting Clara in a pickle, trying to placate both men in her life.

That's not the only fascinating relationship on show in The Caretaker - enter Courtney Woods. The more eagle-eyed fan (or, if you've been listening to our audio commentaries) will have already got the feeling that the young Coal Hill pupil was going to feature again (having appeared in Deep Breath, Into The Dalek and getting a mention in Listen) and, oh boy, does she.

Her scenes with The Doctor are perhaps the highlights of this installment. Again, not wanting to spoil, I shan't say any more but there's a hugely interesting side to Capaldi's traveler on display. Very Doctory. Speaking of being Doctory, some will be glad to see him acting as such. He's got a plan, he's saving the world. It's almost like Rose, where Eccleston's Doctor was working alone to move an alien menace. Crucially though, this is not the man that said just a few weeks ago, “She cares so I don’t have to!” when about to confront a Dalek. The Time Lord clearly cares despite his reservations about humans. Great to see his more heroic and altruistic side two weeks running.

Though you may think the robot of the week looks, perhaps, a little CBBC, the director, Paul Murhpy, has done an immensely impressive job in giving this creation menace. From its first appearance, creeping in the dark, the Skovox Blitzer will leave you in no doubt that everyone in its vicinity are serious trouble - it's no wonder The Doctor is there to remove it.

It’s not all perfect though. Peter Capaldi’s Time Lord still acts in a slightly nasty way (especially to Danny, almost picking on him and PE teachers), and I’m beginning to get rather tired of hearing The Doctor telling people to “Shut up!” on a weekly basis, and don’t get me started on characters constantly referring to doing a “thing” (three different characters have a "thing" to do this week, for example).

Anyway, those small points certainly didn’t hamper my enjoyment of truly terrific and fun story. Roberts brings a warmth and engagement to the proceedings, as he always does, through the burgeoning relationship between Clara and Danny but also highlights the Doctor’s alien yet very caring side.

The Caretaker takes care [Oh dear - Ed.] of building upon the quality of Doctor Who Series 8 with another mighty fine episode packed full of laughs and danger with a side order of love and friendship.

Oh, and I'm sure everyone will enjoy The Doctor's hilarious misunderstanding with Clara.