REVIEW: The Worlds of Doctor Who 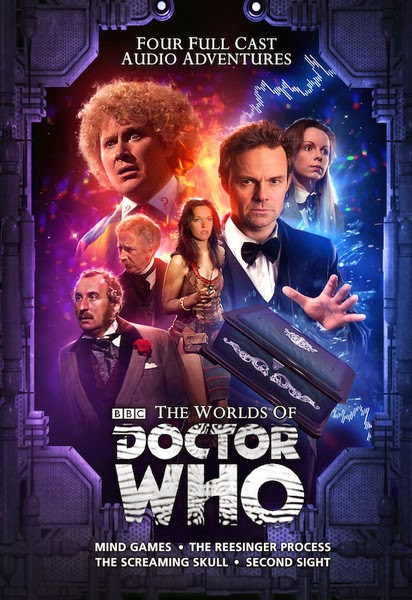 The Worlds of Doctor Who
by Justin Richards, Jonathan Morris
and Nick Wallace.

The Worlds of Doctor Who is the brainchild of producer David Richardson put together to celebrate the 15th anniversary of Big Finish; and what better way to do that than to bring together four of the most successful and best loved Doctor Who spin-off series and throw a Doctor in to the mix as well.

This is Big Finish at its best. The overriding story is very well formed and winds its way through time and through some of the best series they have produced in its incredible 15 year life. The collection is broken up into four parts, from different audio series: Jago and Litefoot, Counter-Measures, the UNIT Vault and Gallifrey.

Mind Games by Justin Richards
In Victorian England, Henry Gordon Jago and Professor Litefoot investigate death and disappearance on the streets of London. These events seem to be linked to a certain New Regency theatre and its latest act, the mesmerist Mr Rees.

Mind Games starts out as a wonderful pastiche of the origin television story for Jago and Litefoot: mysterious murders and disappearances, a mesmerist at a theatre - sound familiar? This is probably the most linear of the four stories, it holds together incredibly well and sets up the series’ villain aptly. There’s a wonderful moment of meta-medium, where Jago and Litefoot record their voices using a phonograph.
RATING 8/10
_____

The Reesinger Process follows a similar instigation of people behaving strangely and murdering indiscriminately. The story works so well as a building block of the whole set and as a very in-keeping plot for the Sixties period of paranoia of Counter Measures, concerning training to withstand interrogation and torture. The combination of plausible and otherworldly work is excellent here and the story feels connected whilst totally different from its predecessor.
RATING 10/10
_____

The Screaming Skull by Jonathan Morris
Disgraced soldiers Ruth Matherson and Charlie Sato, formerly of the UNIT Vault, are called back into action by Captain Mike Yates. Together they must regain access to the mysteriously locked vault and get out alive.

The Screaming Skull feels again like a wonderfully different kind of story. It’s great to find out the conclusion to the last time we saw the UNIT team facing the Master. It’s also wonderful to see the return of Richard Franklin as Captain Mike Yates. I also found it charming that Big Finish decided to make welcome the now defunct rivals AudioGO’s Doctor Who "Nest Cottage" series in to the Big Finish canon.

As always with the UNIT vault stories there are lots of references and relics from stories past. Without wanting to spoil anything I’m sure I’m not the only listener who couldn’t help but see a comparison with another particular villain and his horcruxes. Yates summons The Doctor, but all I could think was, surely their have been times when The Doctor’s presence was needed more urgently.
RATING 9/10 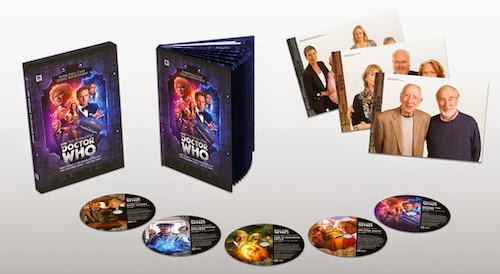 Second Sight by Nick Wallace and Justin Richards
The actions of Mr. Rees have alerted the Time Lords of Gallifrey, so Romana and Leela are on the scene. The Sixth Doctor has been summoned by Mike Yates. A power from the dawn of the universe is about to be unleashed once more.

Second Sight is a wonderful culmination of the three previous stories. It’s great to see as many characters as possible come together in this last instalment. The ending is well rounded and gives the previous stories context, nuance and motivation.

However, the epilogue is ambiguous, leaving things open for a possible follow up. It’s wonderful to hear Colin Baker, Lalla Ward and Louise Jameson together. They also depart together, so I hope we’ll see some more of that particular trio.
RATING 8/10
_____

Music is used particularly well throughout, particularly the nursery rhyme, which is used in many different arrangements; spooky, solemn, bombastic and moving. I agree with the choices of a clear linear progression of time, not having all characters together (as that would feel a little contrived) and praise the continuity of the villain throughout each episode. Each story works excellently as a stand alone and are incredibly varied in quality and tone, yet brilliantly connect together like a delicious chocolate Quality Street jigsaw puzzle.

It feels like the right choice to have Colin Baker as the Doctor, he’s been the biggest Big Finish stalwart and not without cause, as these past fifteen years he has been given the chance to shine and show his quality in the role. Jamie Glover (who played William Russell in An Adventure in Space and Time and is also the son of City of Death's Julian Glover) is fantastic as the villain of the piece, Mr Rees, and, to be honest, the whole cast do a bang up job. Writer Justin Richards has produced a wonderful piece and you can really see his love, care and experience weaved throughout.

The Worlds of Doctor Who comes highly recommended. It’s a great sampler and showcase for the very best of Big Finish and not to be missed. Thank you Big Finish!