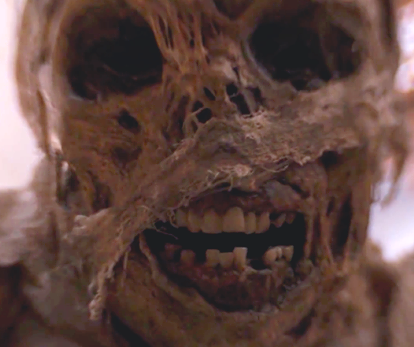 MUMMY ON THE ORIENT EXPRESS
by Jamie Mathieson

After the tumultuous ending of last week's terrific episode, Kill The Moon, many of us were wondering, "What the hell happens now?" With Clara and The Doctor not on speaking terms, it felt like a new start for the grumpy old Time Lord.

The Doctor has finally taken that invitation to the Orient Express (this one, an almost perfect reconstruction of it, in space) for some time off (allegedly), but finds mysterious deaths and an ancient force at work, picking off the passengers one-by-one.

Director Paul Wilmshurst, who performed such sterling cinematic work on the previous episode, continues his hot streak with Mummy the Orient Express.

The titular creature, known as The Foretold, is immense; its design and execution flawless (perhaps maybe too much for some younger viewers). Wilmshurst's camera enhances the true terror and hair-raising horror going on in the adventure.

Each death scene is one to savour; taught, tense and terrifying. In terms of chills, this director is currently Who's best at that multiplying them. And top marks to Jamie Hill for portraying the creature in such a macabre and creeping fashion - this is not some kind of pantomime mummy and most assuredly not Scooby Doo.

Frank Skinner, who, for some, may have been inducing negative prejudicial fears (mainly because  he's not really an actor), is wonderful. Playing Perkins, the train's "driver", Skinner will most definitely fall into the category of "Awww, I wish they'd traveled with The Doctor!" by the time you get to the end of the episode. 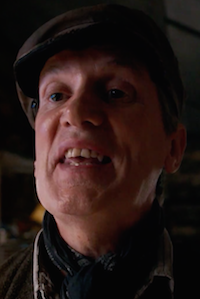 He's a real treat. Rather than playing, predictably, a comedic role, Perkins is not. Yes, there's the odd, very odd gag but he's a like-mind of the Time Lord and, indeed, comes off almost as menacing at some points. A tremendous job from a life-long fan, heartening to see.

The Twelfth Doctor reaffirms his, what I call, "prick status" by being slightly less than sympathetic throughout, joking in the face of other people as they die. It's more than a tad unsavoury and most unsettling despite his best wishes at heart. Mummy very much continues this series' examination of his otherly and cold side.

Like Kill The Moon, this ep also has an interesting halfway gear change, of sorts, moving from the 20s flapper-inspired settings to, well, something quite different... It's a brave shift and I'm not too sure the resolution of the piece quite works. But there's a bigger problem here in this disappointing installment - the hangover from last week's denouement with Clara and The Doctor.

The shadow of their break-up, as it were, hangs heavy over this episode. Perhaps a little too heavy for my liking. For me, it gets in the way of the actual story; distracting the mind with the emotional pull of their problematic relationship. It affects the fluidity of the adventure, giving it a start/stop feel.

After a few weeks of top-notch tales, Mummy on the Orient Express somewhat derails Series 8. What could have been another excellent horror ep is instead a rather confused, unfocused and patchy story.

Oh, and fans of the "Bechdel test" may well raise a wry smirk during one particular scene.