You wait three years for a Doctor Who story with a train in it and then two come along at once. Last week saw the opulence of the Orient Express while this week's gives us Bristol's gritty old out-of-service 2M65. And both from new writer Jamie Mathieson.

The Doctor and Clara find themselves split up once more due to the interference, and possible invasion, of an alien race who exist in a different dimension. These 2D entities are hurting those they come into contact with, "flattening" them in the process. With the Time Lord stuck in the TARDIS, it's up to Clara to become The Doctor... 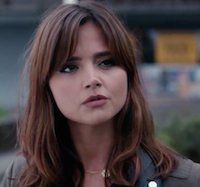 Having a Doctor Who episode set in Bristol may not seem like the most exotic or exciting of events but Flatline is one of the most unusual and otherly stories in a very long time.

This is down to the creation of writer Mathieson - monsters for another realm whose communication with our world is baffling and incomprehensible (well, I did say it was set in Bristol). Their intrusion into/onto Earth is unsettlingly portrayed, with the various deaths expertly realised by director Douglas Mackinnon (who performed such sterling work earlier this year on Listen and Time Heist).

The creepy factor in the adventure is high throughout and gathers pace as the beings begin to learn more about the human race and accommodate their form accordingly; going from classic horror in the home (with a neat nod to Terror of the Autons) to horror on your streets motifs. Indeed, the viewers also learn a lot about ourselves as a society when opinions are spouted on the "lesser" characters in the piece by others. Even in the face of certain doom, humanity still finds a way to act atrociously unpleasant (see also Midnight and Turn Left).

Despite the rather grim and scare-laden tone of Flatline, there is a great deal of humour - including a number of highly amusing sight gags. Why? Well, as you may have seen in the official promo pics and clips, the TARDIS has had a makeover and been shrunkified. The Doctor's joy in the opening scenes upon discovering this is a real delight. "I don't think we're bigger are we?" he beams curiously, adding gleefully, "The TARDIS never does this. This is HUGE!"

From there on, we're given more memorable and mirthsome moments based on the resizing (none of which I shall spoil) creating some genuinely unforgettable sights. It's pretty bonkers in parts, and I mean that in the most positive of fashions. The bravery and vision of Jamie Mathieson and Douglas Mackinnon is to be congratulated heartily.

Guest cast member Joivan Wade does a great job as the graffiti artist who befriends Clara, Rigsy. "People were thinking that no one was listening and no one cared," he muses when it comes to missing locals, commenting that the police weren't interested in the disappearances. Christopher Fairbank, who plays community payback leader Fenton, is terrific - snarling bitterly and nastily throughout. However, I will add, he's underused given his stature and talent as an actor. 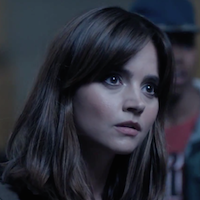 Coleman impresses with her role as "The Doctor", though her lies are beginning to unravel whilst Capaldi really shines as the Time Lord; going from joyfully bewildered to genuinely confused ("Why can't I understand this?" he questions) to saviour. If there is one point in Doctor Who Series 8 that sees Peter Capaldi as THE Doctor, it's here. A truly spine-tingling, fan-pleasing moment that will have monsters all over the universe treading in fear.

Flatline is one of the most unusual - visually and tonally - episodes in the history of Who. There's laughs and scares as well as the odd slice of social commentary thrown in for good measure. And the relationship between Clara and everyone's favourite Gallifreyan takes an intriguing step after her stint as The Doctor. A fascinating and hugely entertaining episode.