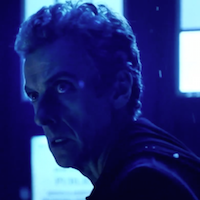 It’s Christmas Day and that can mean only one thing - the world needs the Doctor! And this year is no exception as the nightmarish Dream Crabs invade and threaten to enslave Earth.

Thankfully, for us, Santa Claus is also on standby to lend a hand as Clara and the Time Lord find themselves under attack in a Polar Base (at the North Pole, Santa’s home) along with a group of scientists, some of whom have already been converted by the Dream Crabs.

Between them, they have to figure out just how to defeat the alien menace, which aren’t unlike the menace from Alien (1979) in that they like to hug faces (Ridley Scott’s sci-fi horror classic does get the odd mention in the episode). Santa is the key to the mystery of this attack.

Speaking of the big man, sweet Pappa Crimbo is played with relish by Nick Frost (Spaced, Shaun of the Dead). "Are we gonna get busy saving Christmas?" he cooly drawls whilst his elves, brilliantly played by Misfit’s Nathan McMullen and Dan Starkey (who normally plays Sontaran Strax), look on in awe calling him, "Bad ass."

The trio make for some great laughs as they answer questions on their veracity and generally fool around (look out for Frost's impression of Capaldi). You’ll (no pun intended) be hoping for some more fun from these guys in future festive outings. Surprisingly, however, this lot aren’t as much a part of the story as the team of scientists; a quickly identifiable group of characters. And, like Santa and his troupe, expertly played by the actors involved.

Clara and the Doctor continue their rather problematic relationship with the fall-out from the Series 8 finale all too visible. These facets are woven in to the plot, gratefully, and rather than slowing down the story, add to its menace. Elsewhere, Capaldi finally gets to show some unadulterated joy and you won’t fail to feel his happiness, whilst Coleman gets to do some proper old skool Doctor Who companion screaming and something new for viewers (shan't spoil).

Last Christmas has been described as scary and nightmarish - and rightfully so. I foresee many youngsters needing a hand on getting to sleep come Christmas night. The Dream Crabs, not unlike a cross between the Weeping Angels and the Silence, are on the rather terrifying side and are filmed with a proper cinematic eye, the camera never staying too long on them but giving the audience enough to grab the nearest pillow or loved-one.

Director Paul Wilmshurst does an excellently eerie job with the horror her but it’s not just the monsters that will give chills. There are a number of uncanny scenes that will remind you of The Shining or Hitchcock with its disembodied voices, Dutch angles, empty corridors and zooms - this is psychological terror as well as physical. Indeed, it’s the former that will haunt and unnerve more. Rather satisfyingly, some of the best scares are kept until the denouement.

Worthy of a mention too, and a gold star, is composer Murray Gold who cultivates these scares with sharp strings and also lends a beautifully heartwarming tone to the story's final moments.

It’s not entirely perfect though. There’s still the continual annoyance of people having a “thing” to do or the numerous times "Shut up!" gets delivered (even Santa gets in on the action) and halfway through there’s a slight sag which somewhat slows the story up.

But, other than that, Last Christmas is a hugely satisfying story and a cracking festive outing (certainly one of the best Doctor Who specials). The ending will have some in tears and others beaming with joy and excitement. I can’t imagine anything better for Christmas Day.

BLOGTOR RATING 8/10
Thanks to BBC