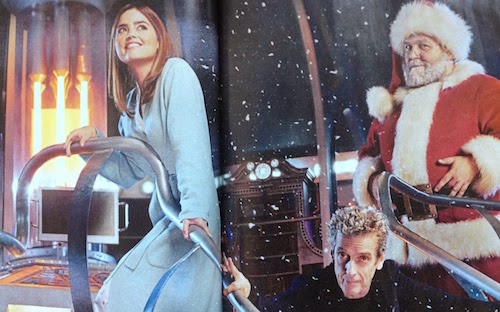 "It's a rather clever Christmas episode as it's festive and jolly but also terrifying. While Santa being on Clara's roof should be an excuse for happiness, it's actually a nightmarish development, and only the Doctor knows why. It's the scariest Christmas adventure so far."

"Kids will be delighted to know Santa remains intact. He's not a robot or an alien - he's the real, genuine Santa Claus!"

Frost, who plays Santa in Last Christmas talked about the history between his character and the Doctor, saying:"

"There's a long-standing beef. You never know why, but from the get-go they're kind of at each other's throats."

The picture included here is from the Christmas edition of another listings magazine, the Radio Times, which includes interviews with Peter Capaldi and Jenna Coleman. What's On TV is on sale now.

Visit the Guide to the 2014 Doctor Who Christmas Special HERE