Included in this post is information about Doctor Who Series 9 - it includes SPOILERS regarding a character and the plot. Please stop reading now if you're remaining spoiler-free. 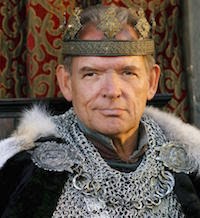 Actor David Schofield has been cast as Odin in the Doctor Who Series 9 episodes The Girl Who Died and The Woman Who Lived - the episodes currently filming.

Odin, as some readers may know, is a well known "god" from Viking mythology (as well as other cultures), suggesting this could be a "Viking" adventure for The Twelfth Doctor.

Originally cast in the role was Brian Blessed, who starred in The Trial of a Time Lord as King Ycarnos, but the actor had to pull out due to illness.

Schofield is well known for his roles in television shows like Merlin as King Alined (pictured left), Da Vinci's Demons and will be seen soon alongside Christopher Eccleston in ITV's Safe House. He has also provided his voice in Doctor Who audio adventures for Big Finish.

The Girl Who Died is written by Jamie Mathieson and Steven Moffat and The Woman Who Lived is written by Catherine Tregenna. Both episodes are directed by Ed Bazalgette (BBC One’s 18th Century drama Poldark).