One of the loveliest things about this big summer event from Titan Comics is the frequency of release – an issue every week keeping us regularly entertained throughout the British monsoon season. It does, however, mean that this team-up extravaganza is going to be over before we know it, which is a shame, because it’s so far proving to be some of the most enjoyable and memorable fun that The Doctor’s ever had in graphic form.

Paul Cornell’s script continues to demonstrate why he’s considered a master of the genre – we’d love to see him back writing for the TV show ASAP. While Issue 2 is ostensibly one that treads water – resolving the cliffhanger from Issue 1 and ultimately revealing the threat presented there as something of a side-track – the character interactions are glorious. We could happily read a Cornell-penned saga of these individuals doing nothing more than sitting around and drinking tea – everyone is drawn in delightful detail, and the dialogue sings. There is a lot of love within these pages. 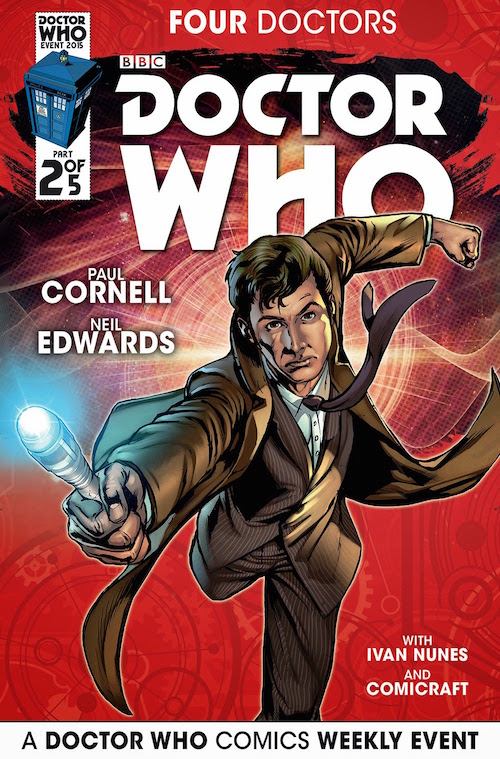 By the time Issue 3 gets going, we’re becoming accustomed to this grouping of three Doctors and three companions – a ‘super-team’ that feel uniquely suited to the pages of a comic book – it’s almost a shame that this can’t be a regular on-going series. (At this point we tried to think of a pun combining the word ‘Who’ with the title of a popular multi-hero comic, but as the best we could come up with was ‘The Fantastic Whore’, we’ll just ignore that and move on…) It’s also sad to think that, for the sake of the timelines, it’s extremely unlikely that a majority of those involved will be permitted to remember a single thing about this time spent as Family Who.

Speaking of timelines – Issue 3 doesn’t half have some fun with them…! Cornell let’s all his fan credentials hang out and cements this as the ultimate celebration of ten years of New Who with gloriously geeky references and cameos going all the way back to, well… all the way back to the David Tennant era – still no sign of anything Eccleston flavoured. We’re continuing to hope that Nine will surprise us all by putting in an appearance before the run is done though. Not there’s a lack of Doctors –another, unexpected, version of him is introduced here, in addition to the titular quartet of Ten, Eleven, Twelve, and War, and gifts us another lovely cliffhanger… 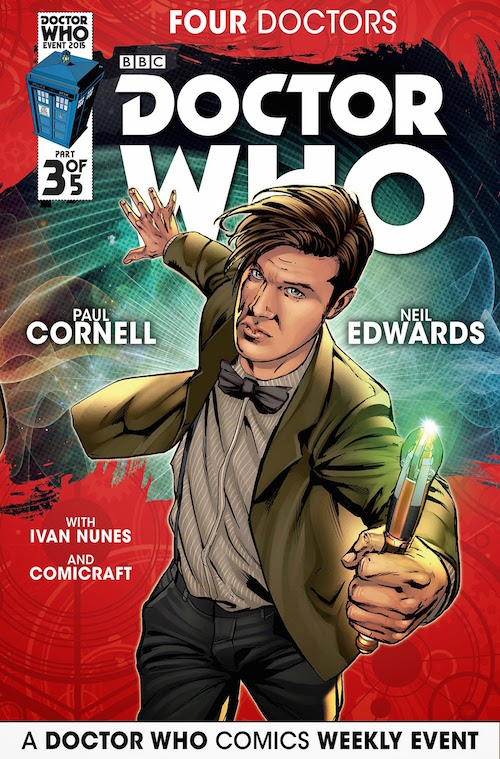 Neil Edward’s art goes from strength to strength – the likenesses are superb and he really gets to show off his craft with the increasingly outlandish demands of Cornell’s script. The full-page splashes are particularly impressive – one that references the current title sequence is especially gorgeous.

An absolute must for any fan of the revived series. We can’t wait for the inevitable deluxe hardback collector’s edition full of sketches and detailed annotations. Cornell and Edwards should be applauded: for having dared to play the Game of Rassilon, and nailing it.

BLOGTOR RATING: 9/10
Thanks to Titan Comics