It was a wet old June day in Caerwent, Wales when Blogtor got chance to to visit the set of Doctor Who Series 9 and interview both Peter Capaldi and Osgood herself, Ingrid Oliver. First up was Peter, who came in especially on his day off to spend time with the press. The interview with Ingrid will be posted in October.

As soon as he enters the room, Peter is all smiles and beaming - and says a cheery individual "Hi" to everyone assembled. Typically, he jokes throughout, opening with, "Welcome to the army base where we do a huge amount of work. All sorts of corners of this place end up in Doctor Who!" 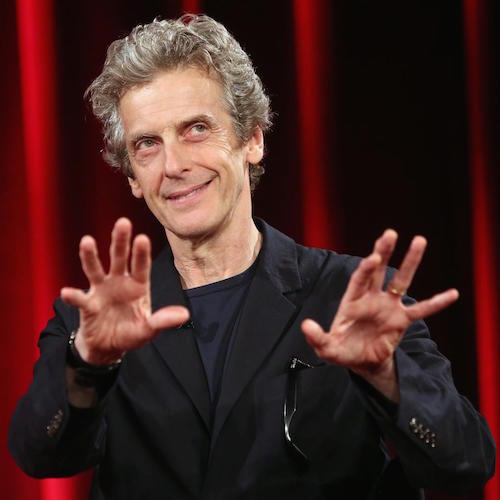 With much discussion from fans regarding Capaldi's new appearance(s) witnessed from filming on Doctor Who Series 9, I ask him about the new look. Your hair, if you don’t mind me saying, is quite incredible…

... was it a conscience move with the bigger hair and different costumes for Series 9?
"I really always wanted it to be longer but everyone felt it was important to make a decisive change. It always happens in the first season of the new Doctor, you make a very decisive change - a contrast to what's gone before. Matt being so friendly and open, they wanted it to be quite different to that.

Some people think I’m going for the full Jon Pertwee bouffant [laughs], and I may well do that.

I have to approve toys and things that come out at Christmas, so they bring me the toys to look at. There’s a Mr Potato Head coming out so I had to approve my own Mr Potato Head! [Laughs] I kept going, ‘Is the hair right? It’s very grey? Is it supposed to be grey?’ and they said, ‘Your hair IS grey!’ [Laughs] I think my hair’s brown, your colour.

With the Christmas Special [2014's Last Christmas], we were in the Antarctic so I thought I’d better put a hoody on. [Laughs] And I quite liked that, it looked quite good so I thought we’d get more of those. He’s loosening up a bit more but there’s still sometimes when he goes back to his more severe sort of look.

And there are some specific trousery things that are happening, for specific reasons. That will become clear to you when you watch the show." 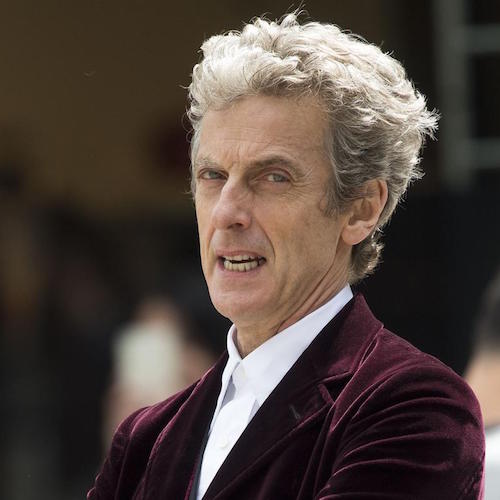 Before we spoke to Peter, we were treated to watching a scene from the new Zygon two-parter. I suggest that Invasion of the Zygons is quite an old-skool title.
"[Laughs] I love an invasion. Been a while since we had one.

We had a great scene. We chased a Zygon around a supermarket, he hid among the pizzas. This is what we do, this how we roll - we get Zygons into a supermarket and chase them.

They’re fantastic. They look amazing. I was very lucky, I made a film many years ago with a very little part called Dangerous Liaisons with Glenn Close and John Malkovich which was set in the 18th century and had the most beautiful costumes. The costume designer was James Acheson, who had created the Zygons. Because he worked on Doctor Who, before he went on to great success and acclaim in the movies, all I wanted to do was talk to him about Zygons! [Laughs] He created those things with limited resources, I think it’s a great testament to his talent.

That happened a lot in those days. You had people that worked at the BBC and moved on to movies. Because the BBC was a great place where people could learn in a very demanding environment how best to deploy their skills.

It’s great there are so many people who are fans of the show and who love the show who make it.

That’s why, and I think it’s always been the same since it came back, that’s why it’s been successful. Because despite the fact it’s become a worldwide brand, it’s essentially made by people who love it. And that also means they will go the extra mile than if you were working on something you were less connected to, you might not put in the extra time or the extra effort to try and make it look better or sound better. There’s a lot of big fans on the show."

Peter describes the story as "very urban, handheldy and modern. Realistic," and further explains:
"This one’s quite dark. One of the things the show hasn’t done in its current invention is to reflect current events very much but I think this one does. It’s a good thing. You’ll see some fundamentalist arguments - it’s very interesting to play with that."

Also starring in the Zygon story is Ingrid Oliver, returning as fan-favourite Osgood.
"I think she’s brilliant, Ingrid’s amazing. it’s a wonderful character, so audacious - what a brilliant idea to create a Doctor Who fangirl. She’s clever and so funny. There are a lot of people who could come in to the TARDIS quite easily, we’re playing around with a lot of offers…"

I ask if she could be a future companion.
"She could well be..."

Peter is asked about the "new" UNIT family that seems to have been established once more with Kate Stewart and Osgood.
"It’s lovely having them all, it’s great. We even had ‘Five Rounds Rapid’ the other day!"

Doctor Who Series 9 has more two-parters than usual, I asked Peter how he felt about the new structure.
"It’s great because you get cliff-hangers. So that’s lovely, it’s always fantastic to have Doctor Who cliffhangers, the screeching sound of the soundtrack - that’s brilliant.

It sort of gives you a bit more time, there’s more places to go [with the story] and more character development. I think it’ll be good. Some of them are three-parters. And there’s one parters. It’s a good development, it allows the writers a bit more time with their characters and story.

The thing about Doctor Who is you must never trust Doctor Who. His knowledge of the past and future is comprehensive, deep and not quite human. So, in his human form, I think he’s decided, knowing how dark it can get outside, that he’s going to have a good time.

But, as always in Doctor Who, no good time is left unpunished. [Laughs]


Peter chats about Jenna Coleman and Clara.
"She’s great fun. We have a wonderful time. I just think she’s brilliant. We work in very similar ways. I love that she’s from Blackpool, my favourite place.

What she does a lot this season is she helps the Doctor relate more effectively with human beings because he can’t be arsed. [Laughs] She has little strategies to help him be better - which is good fun."

And then moves on to discuss another co-star Michelle Gomez as Missy.
"Our relationship is slightly different in that story [The Magician's Apprentice/The Witch's Familiar], than it was before. We’re sort of on the same side."

I love the Master. It’s good to have him/her back. And Michelle is the perfect person to play that part. I think Steven has THE most audacious ideas, he’s very brave with them and I think that it works."

Now that some time has passed since Series 8, I ask Peter if he has any stand out episodes from 2014.
"I always have a soft spot for Listen. It’s a very different kind of episode. It’s about what the Doctor does when he’s not having adventures. What does he think about, what does he get on with? But I like all of them, they’re all great. It’s a shame just to pick one."

Thanks to Peter Capaldi and the BBC.