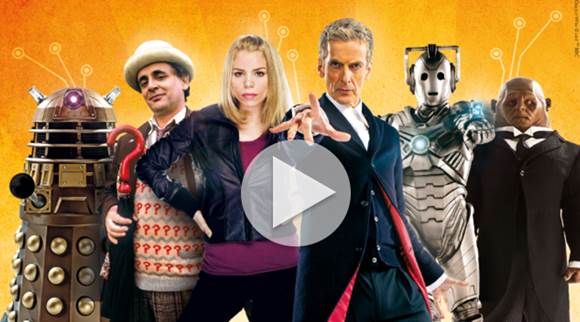 Former companion Billie Piper, Seventh Doctor Sylvester McCoy and Strax actor Dan Starkey, will join Peter Capaldi, writer and executive producer Steven Moffat and writer Mark Gatiss at the Doctor Who Festival in Sydney on the 21st and 22nd November. Tickets can be purchased at Ticketek.

Billie Piper and Sylvester McCoy will appear on stage at the festival in a series of fan Q&As hosted by Adam Spencer. Says Sylvester McCoy: “I’m over the moon, quite literally, as I’ll be coming by TARDIS!”

Dan Starkey will offer fans the chance to learn what it takes to be a monster in a special hands-on drama session. The actor said: “I made a flying visit to Australia a few years ago and I'm really looking forward to coming back and spending a little longer this time. In his long and illustrious military career I'm sure that Strax has conquered jet-lag and I'm certain I will too!"

Dan will be joined by actor Jon Davey, who has played a variety of monsters in over 30 episodes of Doctor Who, he’ll reveal the secrets behind operating the Doctor’s most famous adversary – the Dalek.


The Festival has also announced some new features:

· NEW! MILLENNIUM FX MONSTER SHOW - see the work that goes into creating some of the iconic monsters from Doctor Who with a live monster make-up demonstration and, as a special treat for fans, a brand new never-before-seen series nine monster will also feature on stage.

· NEW! DRAMA SCHOOL WITH THE MONSTERS – alongside Dan Starkey (Strax) and Jon Davey (monster actor), learn what it takes to be a monster on the set of Doctor Who in this hands-on drama school session.

· NEW! PRODUCTION VILLAGE – get a glimpse of life on set in the ‘Production Village’ with Gary Russell (Script Editor). Learn about the different roles in television production and what it’s really like to work on set. How early are the call times? Who arrives first and who leaves last? Who has the most difficult role, and most importantly, who looks after the key to the TARDIS? In the Production Village these questions and more will be answered, as fans are offered an exclusive insight into the many parts involved in bringing them the world’s longest running sci-fi program.

· NEW! SCIENCE OF DOCTOR WHO - on this amazing journey through space and time, comedian Rob Lloyd explores the scientific mysteries of Doctor Who. Featuring original scenes from the iconic BBC television series, this interactive session investigates the science of time travel, asks if regeneration is possible, and explains how the TARDIS can be bigger on the inside. Brought to you by RiAus.

· NEW! ICONIC SET - direct from Cardiff a unique setting from this season’s Doctor Who will be coming to Australia for the first time ever.

· Q&AS - see the writers and cast from the series as they talk about how to make an idea become reality on a series as big and bold as Doctor Who.

· PHOTO AND AUTOGRAPH OPPORTUNITIES - a limited number of opportunities for photos and autographs with selected talent.

· WRITERS’ MASTERCLASS – ask Mark Gatiss how a Doctor Who script is crafted and discover the techniques behind the art of dramatic scriptwriting and how to get work published.

· SFX DISPLAY - witness first-hand some of the spectacular effects seen in the series such as explosions and fireballs, elemental and atmospheric effects, mechanical rigs and pyrotechnics.

· WARDROBE DEPARTMENT – a fantastic exhibition of costumes and props.

· COSPLAYERS’ SHOWCASE- fans can showcase their impressive Doctor Who-themed outfits with a special prize awarded to the best dressed.

· DOCTOR WHO QUIZ – this is the ultimate Doctor Who quiz, where fans can show off their in-depth knowledge of the Doctor, his adversaries and the many adventures he’s had through space and time.

· THE FAN CHALLENGE - fans young and old can battle it out and test their Doctor Who knowledge.

The Doctor Who Festival will be held at the Hordern Pavilion and the Royal Hall of Industries on Nov21 & 22. Tickets can be purchased at Ticketek