Following the launch of Character Options’ double helping of Exclusive Doctor Who Missy figures last week, the actress who plays Missy, Michelle Gomez, has been photographed with her miniature alter egos.

The figures have whipped up storm with Doctor Who fans since they were revealed last week by way of a virtual press conference hosted by Character’s product development director Alasdair Dewar. Missy is otherwise known as The Master; an arch enemy of the Doctor, but favourite with the fans who have been calling for a collector’s piece of her for some time. You can pre-order HERE.

When coming face to face with the figures whilst in New York last week Michelle said:

"I absolutely adore my new figure! I can just imagine thousands of Missy’s taking over the world one very small step at a time." 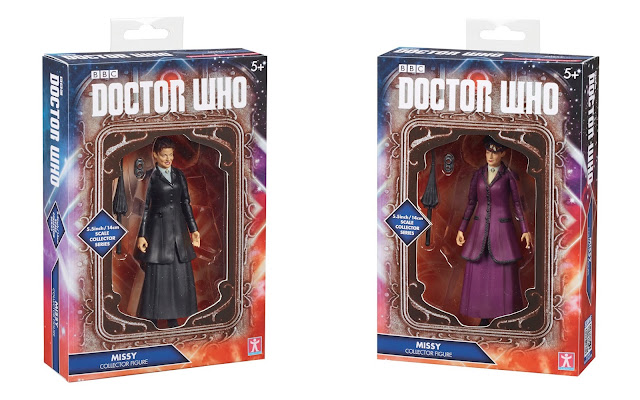 The Missy Figure is available in two variants; a black jacket version from Series 8 Episode 12; Death and Heaven and a purple outfit version. Standing 5.5 inches tall, the Missy figure includes 18 points of articulation, is highly detailed and realistic. As an added feature, each head can be removed and swapped so that both expressions can be incorporated into each outfit and they both include a teleport accessory and iconic umbrella.

The bespoke Collector Series packaging is easy to display and re-sealable so that the Missy can be enjoyed without losing the collector’s authenticity.

Only 4,000 pieces of each have been manufactured for the UK market and are available exclusively online at www.character-online.co.uk for a price of £19.99 each. Delivery will be made to customers by early November.