Doctor Who Series 9: A SPOILERY look at Before The Flood

In a new feature on Blogtor Who, each week regular contributor Richard Unwin will be taking a more personal, in-depth and spoilery look at each episode. So, obvs, SPOILERS ahead if you haven't seen Doctor Who Series 9, Episode 4. 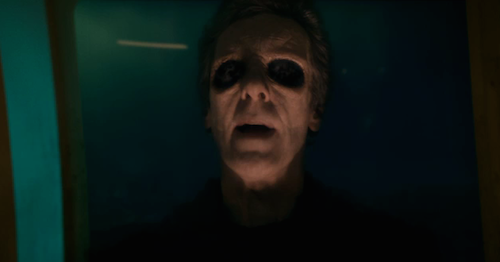 That was fine. A good solid ‘monster of the week’ story, topped with a neat bow of timey-wimey twine to hold everything in place.

The eventual plot reveals are satisfying, if a little mechanical in execution. (We can't have been the only ones who guessed what was in the box…) This second episode’s trip back in time, and its revelation that the Fisher King was defeated in the past - long before the TARDIS first arrived at the Drum, allows the story to breathe and gifts it a mythic quality that might have been denied had we remained in the sardine tin… But the whole thing ultimately seems a little low-key. Which is fine – there’s absolutely time and space to tell smaller stories, and if the less assuming instalments are as well executed as this, then the show is shipshape and Bristol fashion.

Where Under The Lake/Before The Flood really succeeds is with its cast of colourful and interesting characters. The crew of The Drum, who were perhaps a little difficult to get a handle on last week, are much better defined here – definitely benefitting from the two groups splitting into different time zones. 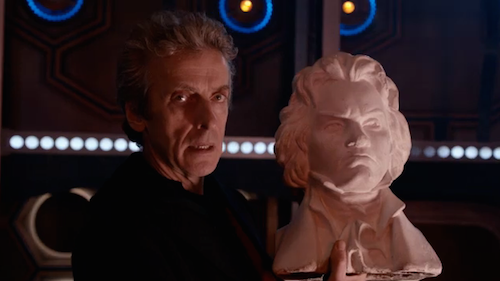 There’s a standout performance from Sophie Stone as Cass - it's wonderful to see Doctor Who once again leading the way with diverse casting, and doubly good that Cass’ deafness is integrated into the plot in an interesting and believable manner – as one deaf fan, Daniel Milco, wrote on Facebook after Under the Lake:


“You know what else was so bloody awesome about Doctor Who? No superhuman instantaneous lip reading DEFSUPAPOWASKILLZ. It took several guesses and goes for the deaf character to crack what the big bad were saying and only because they kept saying it over and over again. Now that’s realistic.”

Paul Kaye undertakes the part of Prentis with suitably slimy servitude, and it’s a welcome return for the Tivolian race – first introduced in author Toby Whithouse’s series 6 episode The God Complex. The conceit of a species who gratefully welcome invaders is one that we reckon still has some mileage yet to be explored – we’d not be adverse to visiting the Tivolian homeworld for a fuller study of their idiosyncratic desires one of these days. (We can only imagine what the ‘equipment for subjugation’ that Prentis carries around with him actually is…)

The Fisher King himself is an interesting creation. (According to Wikipedia the Fisher King of legend is the last in a long line charged with protecting the Holy Grail, and is usually depicted with an injury to the groin. Can't say we noticed that here – perhaps that's where the tsunami hits…?) The unique vocals of Peter Serafinowicz, and the scream of Slipknot vocalist Corey Taylor, combine with an effectively realised costume and beautiful direction to create a macabre monstrosity that will haunt our nightmares. Until it walks outside, that is. Some unforgiving daylight and an alarming wobble of the creature’s ‘crown’ briefly give the impression that it's something that Bonnie Langford might be found screaming at in a quarry, in 1987. Although it's really just a few seconds, they do rather undermine a lot of the tension that’s built up. But let’s be kind - perhaps it's just part of a really concerted effort to make this feel like properly traditional Who.

In summary: this fishy tale totally succeeds as a self-contained saga, serving quite adequately as a breathing space between the flash bang fireworks of the opening two-parter and whatever’s happening next week with Maisie Williams as Romana/Rani/River Song… (Odd to think that with just two stories under our belts, we’re already a third of the way through the series…) It wasn't our absolute favourite, but judging by the online reaction to Under The Lake – which is being hailed by many as a modern classic and a ‘return to form’ – we may well be out of step with popular opinion. It'll be interesting to see if these rave reviews are upheld now that the second part has aired. Let us know what you thought in the comments section below. 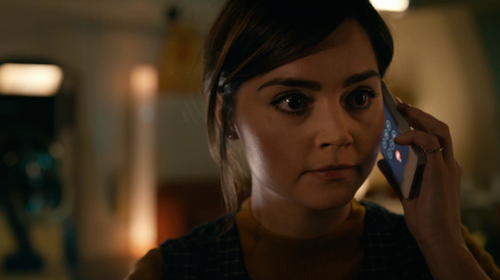 Right - sonic sunglasses on and back to dry land - forward, to The Girl Who Died…! (Sounds cheery - anyone else notice a theme of death permeating the series so far…? Careful Clara… we reckon that you should be VERY careful…)