PLEASE NOTE:
This interview has SPOILERS for Face The Raven 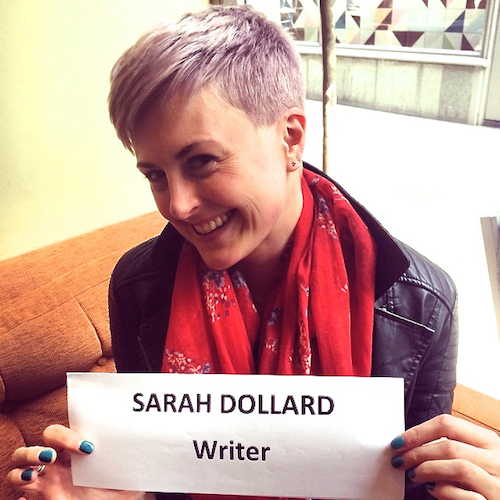 Last weekend during the Doctor Who Festival, Blogtor had the pleasure of sitting down with Australian writer, Sarah Dollard - who has penned the Doctor Who Series 9 episode, Face The Raven (spoiler-free review HERE).

After discovering our mutual love for '80s companion Tegan over a couple of hot beverages in the middle of London's ExCel centre, we chatted about her episode whilst also trying not spoil the story for Who fans at nearby tables....


READ PART 1 OF THIS INTERVIEW HERE

Sarah continues to tell me about how she originally envisioned the Trap Street in Face The Raven.
"In the script I describe that it was hodge-podge of alien spaceship parts, little cubby houses built on top of the era of British architecture. You actually see it in the scenes where the body is preserved. To me the whole street was going to look like that, a mixture of alien tech and old British architecture.”

The Doctor is filled with anger, quite unlike any other time in the show’s history. Was that moment always part of the plan?
"Capaldi’s really good at that. It definitely came through in the very last draft. Because for a long time I think it was she [Clara] went out more quickly but that countdown of two minutes and the Raven taking from its perch, they had less time together.

I think that idea is really important because, to me as a viewer, Peter’s Doctor is uncomfortable with being vulnerable in a way where Ten or Eleven wore their hearts on their sleeves. Capaldi’s Doctor plays it much closer to his chest.

Some people have commented that he’s a Doctor who’s on the spectrum. I think that’s an interesting reading of it - I don’t think that’s the case. I think he doesn’t have much time for other people’s emotions."

I think these days the term “spectrum” is often overused.
"Yeah, I think it’s a shorthand, an unfair shorthand often. They use it because he’s uncomfortable addressing other people’s emotions, that doesn’t mean to say that there isn’t a broiling sea going on under the surface and usually it’s covered with this grim, grumpy bluster [laughs].

Do you know how hard it was to keep this photo under wraps?? @Maisie_Williams is brilliant in this week’s #DoctorWho pic.twitter.com/WhL2HtkXEp
— Sarah Dollard (@snazdoll) November 17, 2015

At what point did you find out Clara was going to die?
"I’d done a complete first draught and that was read by everybody. I came in for second draft meeting and sat there at the table and Steven [Moffat] said, ’Good news is, we really love it. We love it so much, we’d like to talk about putting at this point in the season where it can form the part of an arc.

They told me about Ashildr - I was like, ‘Awesome’ - Ashildr is played by Maisie Williams - and I spilt my water all over the table! [Laughs] We then talked about Clara and at that point I don’t think he [Steven Moffat] knew for absolute certain exactly what he going to do with her end. Certainly death was being talked about but he wasn’t sure if it was going to be in [episode] ten or in twelve.

We definitely, definitely knew that he wanted eleven [Heaven Sent] to be The Doctor by himself with no hope, no TARDIS, and no friends.

In talking about it, it didn’t make sense that Clara would be left behind because if Clara is left behind, when you see The Doctor alone in eleven there’s a possibility that she could rock up in the TARDIS or whatever.

So in that meeting it was decided I would be given the chance to write that script. Things weren’t completely nailed down but we knew we needed The Doctor to have the teleportation bracelet on and then taken away. Ashildr had to have good intentions and have a go at the death! Even though I was definitely in the season by that point, that was in motion as well. I think that was putting a lot trust in a writer they didn’t completely know. It was still in a state of flux until they read what I’d done but they liked it so it was fine.