Crikey, what a month for fans of the Daleks! Not only is there THE DALEK COLLECTION on DVD and a CD compilation of the soundtrack to the Dalek movies (review coming soon) but there's also this twelve episode double~story from the Jon Pertwee era. Although, it has to be said, the first tale, Frontier In Space, doesn't actually feature much of the little guys 'til the last moments of the last episode. 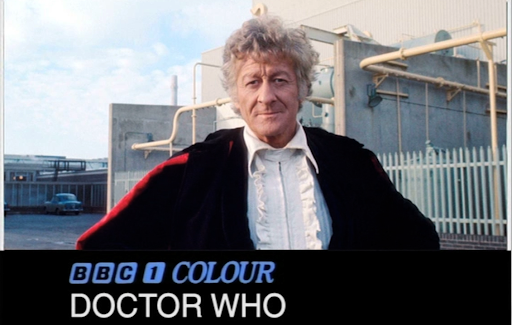 FRONTIER IN SPACE
I first caught this "space opera" (as some like to call it) when it was released on VHS back in the Nineties and immediately became one of my favourites from this era - there's just so much going on! There's the fantastic design (and performances) of The Draconians and The Ogrons juxtaposed against the simplistic 70s "future" design of the humans. And to top it all, there's The Master scheming and plotting (and it takes some time to find out just exactly what). 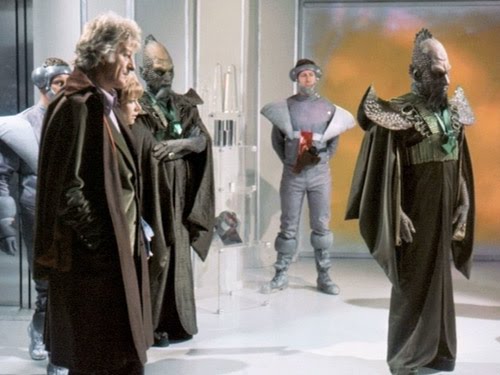 There's an incredible 'now' feeling to the proceedings on 26th Century Earth, with rolling news strips and broadcasts so favoured by the current production team - and there's a woman president! 'Our' world is pitted against that of the Draconia, a more elegant and regal bunch, for sure, who like to spout "My life at your command" at any opportunity. It's heavily political and mirrors many disturbances in real life since. Enter The Master.... 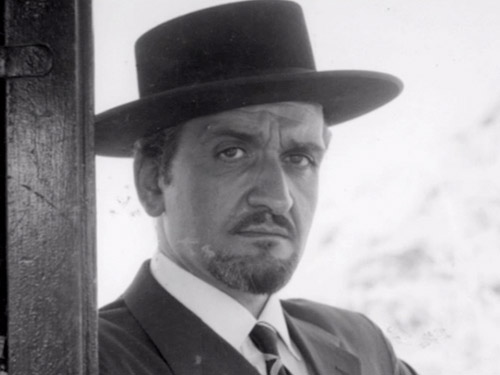 ROGER DELGADO perfectly pitches his performance as a character, not that of the 'enemy' or a 'villain' and this only emphasises his cool menace. We then find out he responsible for the impending intergalactic war and so The Doctor and Jo Grant do their best to stop it (well, Jo wears nice outfits at least). The three make great viewing with the prison ship scenes proving to be the most entertaining, each actor clearly in tune with the other. But when it turns out that The Master's plan isn't running to order (or is it?), he has an ace up his sleeve.... 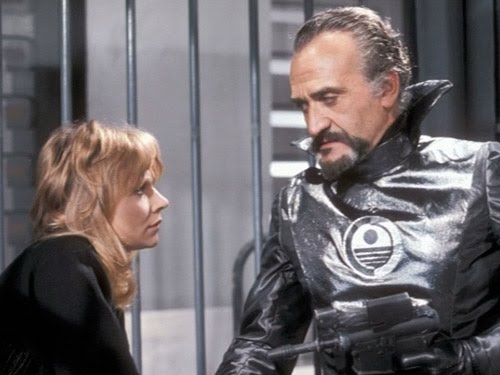 Yup, The Daleks! In an incredible reveal (shades of it visible in 2006's Army of Ghosts cliffhanger), Skaro's finest turn up and start killing every one in sight. A cracking end to an incredibly interesting story that may have its shortcomings in the production department (the models, for example) and location shooting (70s London doubling for a future~scape), Frontier has a grand, epic scale that will keep you enthralled and intrigued for each episode - no mean feat for a six~parter. 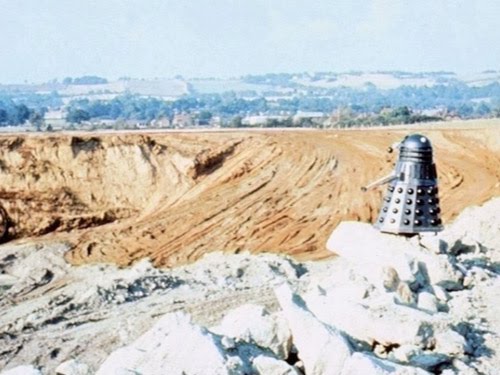 PLANET OF THE DALEKS
Sadly, the six episodes that are Planet of the Daleks don't quite match their predecessor. Not only is the idea a retread of another story (their first outing from 1963), it fails to fill out the allotted time with far too much padding. Though it looks gorgeous, there's no meat to the tale - Dalek fans may be satiated but Who fans will be left wanting. Without wanting to use the word "romp", that's exactly what Planet is; an unabashed romp through the jungle with very thin characters. The Thals have changed somewhat since their more enigmatic debut and even the Daleks themselves are reduced to toys (literally) but thankfully the cast manage to keep up interest in the script. 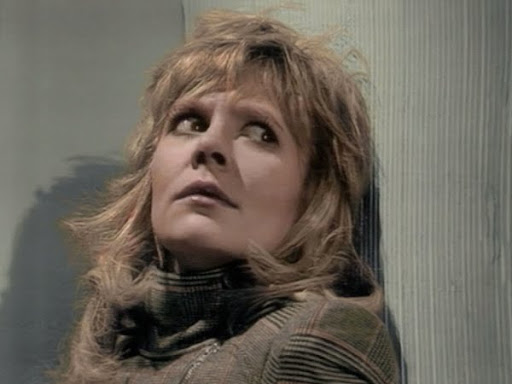 It's not the most memorable of outings though you will remember some of the more risible elements of the story. At six episodes, Planet of the Daleks outstays it welcome and lessens the affect of The Master's grand plan and union with the little guys. The Master's hasty exit from the saga also jars, he literally exits stage left with The Ogrons. The Daleks get a lot of dialogue and that grates after a while (to be honest, they're not my favourite enemies) and one longs for Davros to pop up and have a proper conversation. Sadly, he wouldn't be around for a couple of years yet. A disappointing conclusion after the set~up of Frontier In Space. As a final note, the Restoration Team deserve a huge amount of credit (not to mention special cuddles) for their colourisation of Episode Three. If I hadn't known that the particular installment had been altered, I would have been none the wiser - a true testament to their talents. 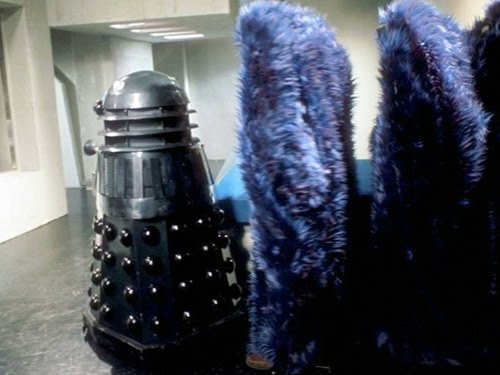 EXTRAS
2|entertain certainly don't shirk from giving fans a full experience when it comes to the Special Features and the Dalek War set is no exception. The commentary for Frontier in Space is will moderated by Clayton Hickman who keeps the gang - consisting of Katy Manning, Terrance Dicks, Barry Letts - in tow, reminding them every now and again that they're meant to be discussing Doctor Who. Dicks is a riot using phrases like "splendid bit of cleavage" though I was curious to how he knows that Dr Who was watched by people in prisons. Sadly Mr Hickman isn't around on the second commentary so those involved - the gang are joined by actors Prentice Hancock and Tim "I'm Not Really A Dalek Person" Preece - tend to discuss their careers rather than Who. Also infuriating is Dicks banging out the Terry "Apparently Likes Champagne" Nation lunch story for a third time on this set - a bit more editing would have been appreciated there. 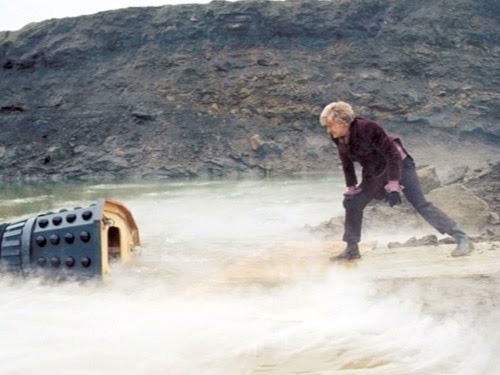 The documentaries included here are the usual brilliant fare though the production team have decided to shake things up with the inclusion of two docs entitled The Perfect Scenario. Fans with less than a sense of humour may want to steer clear as reverence is bundled out the window in favour of an hilarious look at the two stories. Highlights include: the phrase "selective now stretching"; a description of Frontier as "a bit boring" and "basically just padding"; and a face~off between the aforementioned Dicks and Janet Fielding discussing sexism in Doctor Who - an amazing juxtaposition (amazing if only for the fact that Fielding actually watched some "classic" Who). If anyone from the production team are reading this - more please! This style of feature is the perfect antidote to the sometimes over effusive and respectful (but still essential) documentaries. 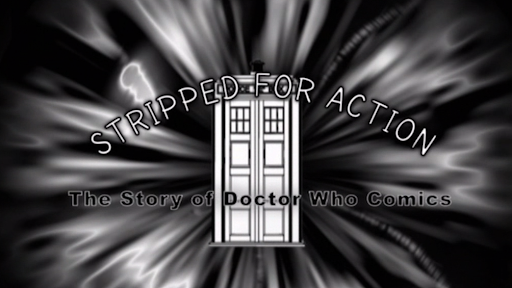 Continuing the series, Stripped For Action returns with a look at The Daleks and one at Jon Pertwee - yet again, a fascinating study of Who in the world of comics. As I mentioned, episode three of Planet of the Daleks has been re~colourised and there's an accompanying feature that goes into detail on just how the Restoration Team managed to weave their magic - some may find it a bit dull but it went off the interest~o~meter for me. The whole process still seems like magic - well done boffins! There's another documentary on this set that deserves a mention and high praise, Roger Delgado: The Master. It's a superbly researched piece into the life of Delgado featuring some astonishing archival photographic, audio and visual materials with incredibly moving contributions from those who knew him, rendering the ending of this feature utterly heart~breaking. 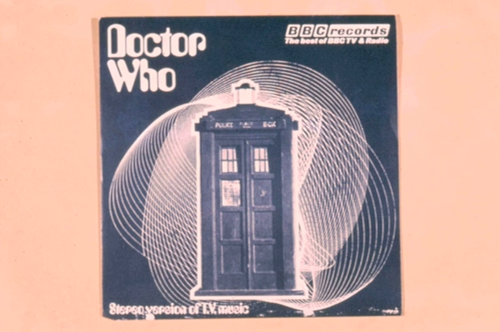 Add to that an amusing two~part Who Dunnit from Blue Peter (two Daleks went missing!), two fantastic photo galleries, the always informative Subtitle Production Notes, PDF materials consisting of production plans and Radio Times listings and you've got yourself a set worth purchasing for the extras alone.