Our last Christmas with Davey T and The Tenth Doctor, sniff. 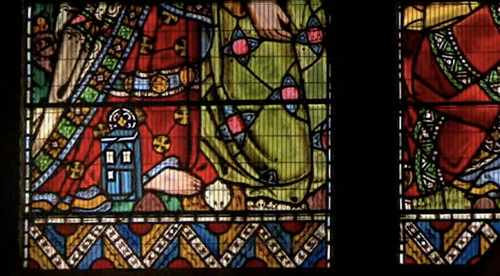 Anyway, moving on.... In case you hadn't noticed, The Master is back. Before I continue with this review I would like to, if you will indulge me, take time to express a gripe about a certain percentage of the Doctor Who 'fan' community. I don't really read reviews (of anything, not just Who) but it was brought to my attention that a number of 'fans' (and I use the term quite wrongly) bemoaning the fact that The Master has suddenly acquired new powers (shooting his load everywhere and practicing successfully for the 2012 Olympics high jump). 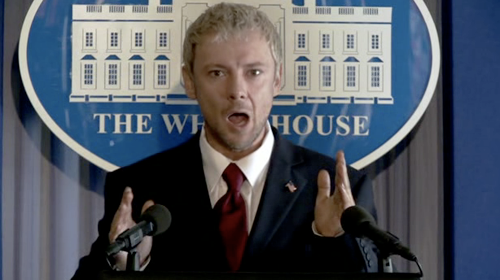 Now, correct me if I'm wrong (don't worry, I'm not), The Master has changed a number of times over the years, even in the 'classic' series. He turned into a flippin' snake in the 1996 Paul McGann outing for eff's sake. The blighter also managed to outlive his regenerations AND take over other people's bodies and use them as his own. It's called 'change' and it happens all the time. Doctor Who is ALL about new stuff happening. Regenerations, Time Lords and Gallifrey were all absent from the show's opening years yet we take these things for granted now. So much has changed from year to year (don't get started on 'continuity'), decade to decade and THAT is how Doctor Who still lives to this day. 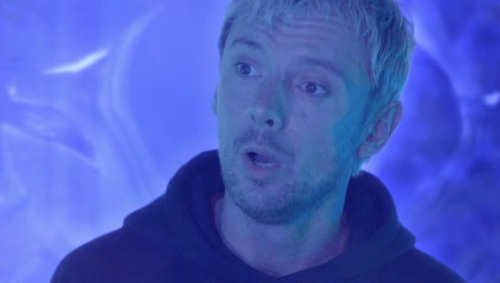 This is a show about an alien who can change his appearance and travel in time and space in a wooden Police Box (that's bigger on the inside, by the way). If you can accept those, frankly, ridiculous traits, then you should be able to accept everything - don't pick and choose what you like just because something 'new' happens. So, The Master can now shoot laser bolts and jump like a Jedi? Big deal, the regenerative process is a mystery (as has been stated numerously throughout Who's history) so who's to say what's right or wrong? Anyway, I'm more concerned about his hair changed colour.... * 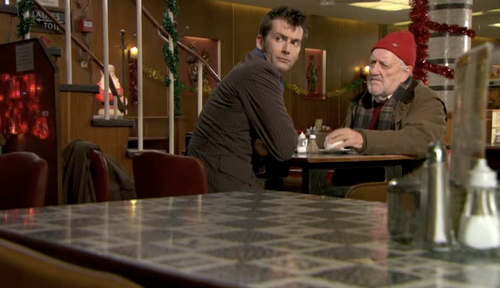 So, if you don't like The End Of Time, Part One that's fair enough but don't go on about how The Master is 'suddenly' different - he's always been different, always evolving (and you can add the mythology of the Daleks, Cybermen and The Doctor in there too to the cauldron of change). If you cannot accept change then, I'm afraid, you should perhaps not be watching a series whose primary motif is change. 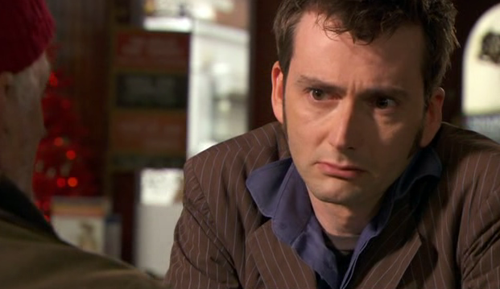 Apologies, back to the episode. At the center of this remarkable (not to mention brave) piece of Christmas programming are the fascinating relationships between The Doctor and Wilf, and The Doctor with The Master. BERNARD "Sir Cribbo" CRIBBINS delivers a heartfelt and tear~inducing performance only out~gushed by DAVID "Sprouts In The Oven" TENNANT in the cafe scene. It was such a touchingly poignant moment, The Doctor reduced to a child apologetically recounting recent events - admitting he got it wrong. A truly amazing moment played by two actors who clearly connected strongly with the material given to them. 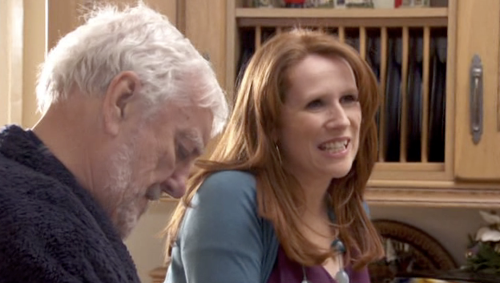 But it wasn't all tears (well, it almost was). Donna was back and, even in her reduced role, CATHY T managed to raise a hefty amount of chortlings from your humble reviewer - the mother/daughter relationship as delightful as ever. RUSTY D revealed how tempted he was just to use Donna as the companion again but, instead, stuck to her story and didn't 'cheat'. Another brave move from the man. Personally, I would have lurved to have seen Donna back as a full~time companion but there you go, can't have everything. We were however treated to.... 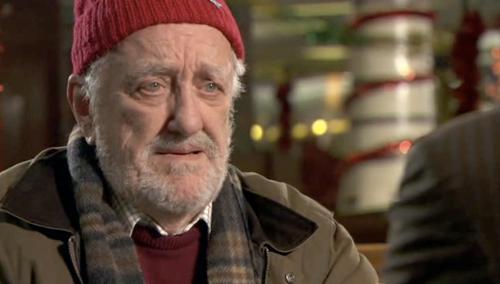 ... loads of the Crib~monster - and what a treat.com that was. Wilf makes an excellent 'assistant' though one is rather concerned how his story is going to pan out in Part Two. And one also wonders just what this 'Heart of Coincidence' malarkey will reveal - maybe he ends up banging that chick in dressed in white. Speaking of reveals, the superb 'cliffhanger' (sorry, not the 'best ever' as previously claimed by those involved) gave us the return of the Time Lords, who appear to be the 'baddies' (if I may be permitted to use such a reductive term) - another way in which the series' mythology evolves. Sometimes the big~collared beings are good, and sometimes bad, but always big~collared. 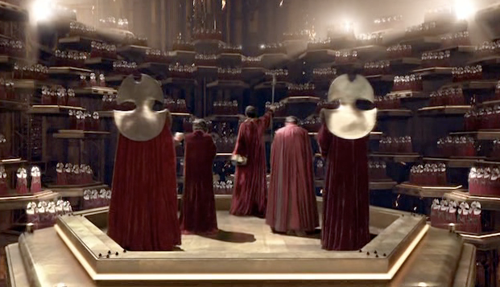 TIMOTHY "As Good As Bob Holness?" DALTON made an engaging narrator and the device was well handled. Plaudits too go to director EUROS LYN who appropriately manages each scene, each moment with the tone they deserve (particularly the aforementioned cafe scene). The End Of Time, Part One is by no means perfect (but I would find it an impossible to label any form of entertainment 'perfect') - the pacing is a bit start/stop; I wasn't overly keen on the 'hunger' angle of The Master and his constant laughing got a bit wearing; and the reveal of the world's population as the renegade Time Lord was too long. But these are mere asides as Russell T Davies has delivered an incredibly bold piece of television (especially for Christmas Day, where we normally celebrate the birth of Coke) that engenders an enormous sense of scale whilst also still maintaining the beautiful inter~personal relationships. A reminder of why I'll miss RTD & Co. 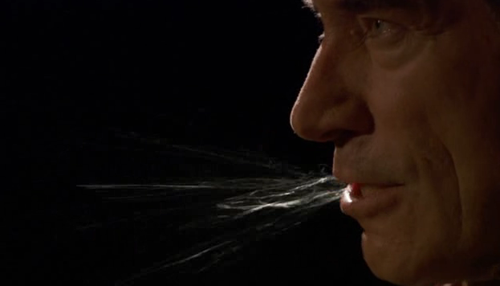