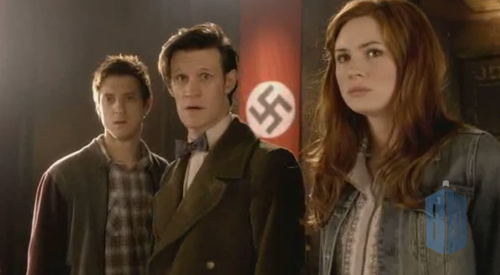 Let's Kill Hitler is but only a week away and Blogtor has some teasers for you to salivate over the next seven days. Read the spoiler~free review HERE and listen to the podcast special where we discuss this week's BFI screening of the episode HERE.

The Doctor crops up in the most oddest of places.

River Song and The Doctor's relationship is tied up in a bow.

Someone does an impersonation of The Terminator.

Rory is not gay whilst Hitler is definitely in the closet.

Is that a banana in your pocket?

The Vampires of Venice is mentioned at a crucial moment by The Doctor.

Other people know about The Doctor's death~day.

Hitler isn't the only person someone wants to kill.

A film referenced in The Impossible Astronaut is referenced again. Twice.

The words "the Silence" are visibly apparent.