September sees the Eleventh Doctor heading for the Big Apple in AudioGO's exclusive audio adventure, Blackout. Specially written by Oli Smith and read by Stuart Milligan (Nixon in The Impossible Astronaut and Day of the Moon), it sees Amy and Rory dealing with a deadly virus while the Doctor faces a terrible dilemma...

November 9th, 1965. New York City is plunged into darkness, a taxi driver has bad dreams, and an invisible spacecraft hovers ominously above the skyline.

As an extra-terrestrial disease sweeps the populace, Amy and Rory must sabotage the city's water supply to slow the spread of infection, and a dying Doctor holds another man's life in his hands.

With the death toll rising, and his companions stalked through the streets by alien businessmen, the Doctor is forced to make a terrible decision.

How far must he go to save his friends? 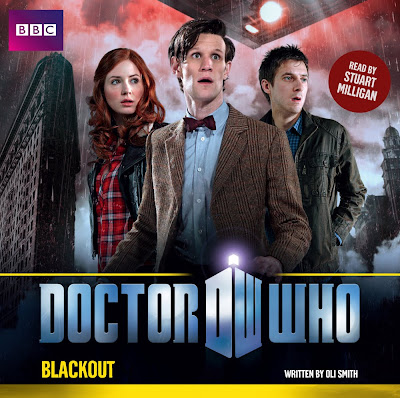 Travelling from New York to South London, the second audio release, Touched by an Angel, is written by Jonathan Morris and read by Clare Corbett. It features the Doctor, Amy and Rory, as played by Matt Smith, Karen Gillan and Arthur Darvill in the spectacular hit series from BBC Television, and is a thrilling tale of paradox and predestination.

In 2003, Rebecca Whitaker died in a road accident. Her husband Mark is still grieving. He receives a battered envelope, posted eight years ago, containing a set of instructions with a simple message: "You can save her."

As Mark is given the chance to save Rebecca, it's up to the Doctor, Amy and Rory to save the whole world. Because this time the Weeping Angels are using history itself as a weapon...