He's back! For the third successive year, Tom Baker returns to audio as the Fourth incarnation of the time and space travelling Doctor, in a brand new series of full-cast adventures from writer Paul Magrs.

In Tsar Wars, the Doctor (Tom Baker) and Mrs Wibbsey (Susan Jameson) are catapulted from present day Earth to a futuristic civilisation in a distant galaxy. At the Robotov Palace they find the Tsar and Tsarina ruling over their empire whilst human workers toil on satellite moons. The Doctor is mistaken for an old ally of the Tsarina's, but then suspected of treason when the Palace comes under attack. Dark secrets are lurking in the shadows, and the mysterious Father Gregory will set off a chain of events which have long-lasting consequences for the Doctor and Mrs Wibbsey. 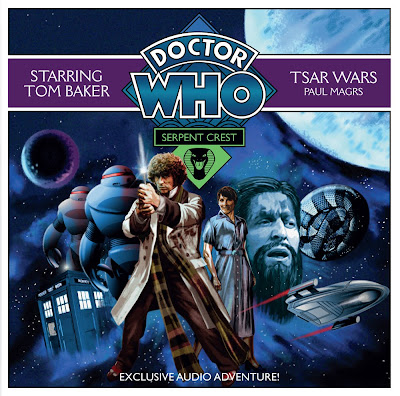 Future instalments in the Serpent Crest series will find the Doctor and company marooned in a 19th Century English village, trapped in a labyrinth of mythical treasures, pitted against an alien incursion, and surviving against the odds on a distant moon. Guest actors will include Terrence Hardiman, Joanna David, Richard Franklin, Geoff Leesley, Su Douglas and Andrew Sachs with others yet to be announced.