It's very difficult to write a spoiler~free review of a story that is almost entirely constructed of surprises. Let's Kill Hitler goes from one mind~smacking reveal to another; it's an episode of moments. Big, big moments. Huge, even. The fact that the title alone includes the name Hitler speaks volumes. The Series 6, Part 2 opener is about as bold as Doctor Who has ever been.

So, I shan't be spoiling any of the delightful surprises in store for you (and there are many, all in varying degrees of WOWness). It does, however, leave little left to actually discuss. As seems to becoming the norm with SteeMo, the actual plot plays second fiddle to the endless array of MoffTrix.

Due to this, there's a slight feeling of deja vu as Moffat's previous big~hitting moments get churned out again; a tad repetitious. But it's so much fun that you may not care about such things. And there's a lot of fun here right from the get~go as Amy and Rory attract The Doctor's attention in a novel fashion as they look for an update on the whereabouts of their daughter.

Juxtaposing the Pond's familial strife (Melody's kidnap) is the titular villain himself (who receives nothing in the way of pleasantries from our heroes) and a surprisingly massive sci~fi element (or, rather, tiny). Though these merely act as backdrop to the revelations and further mysteries to come. 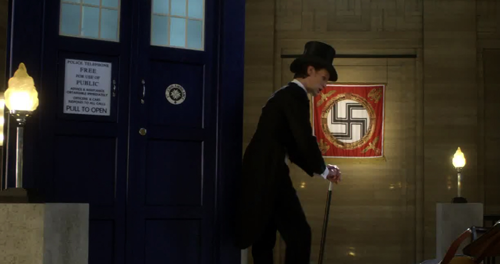 From a production stand~point, Let's Kill Hitler looks stunning and the direction really blasts along covering action, comedy, romance (urg!) and sci~fi with some style. There are even some real moments of horror that may disturb younger viewers (hell, it freaked me out a little!). Points off, though, for the shoddy use of BBC promotional pictures in one scene (rendering what should have been a wonderful moment rather cheap) and the slightly~less~than~effective jellyfish~type robots. 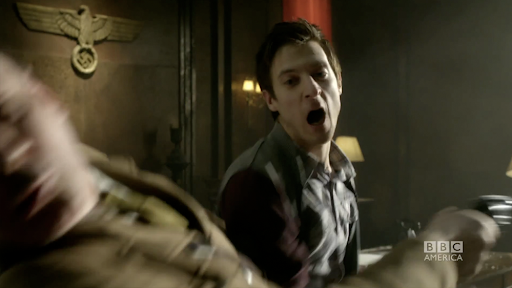 Those expecting answers and resolution after the events of A Good Man Goes To War will be left wanting as Moffo has given some answers but thrown up even more questions regarding characters and the events of Series 6. But, like any good opener, it's an attention~grabbing fun~fest, littered with some of SteeMo's funniest Who gags and a performance to savour from the goddess Alex Kingston.