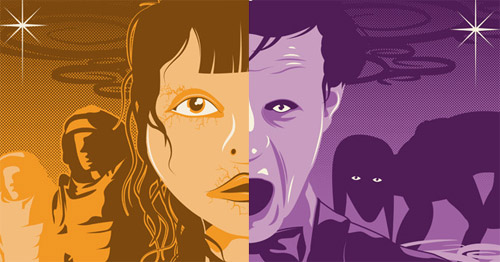 UK digital channel BBC Three continue to repeat Doctor Who Series 6, Part 1 with another double~bill on Friday, August 19. This week sees The Rebel Flesh and The Almost People airing from 7pm. The re~run will finish in time for the launch of Series 6, Part 2 on August 27.

The episodes will be available on the iPlayer shortly after - and now, in Europe, you can access the iPlayer on an iPad! And, if you have the inclination, the Blogtor Who audio commentaries are still available - check them all out HERE.

Listen to The Rebel Flesh commentary

Listen to The Almost People commentary

Don't forget that digital UK channel Watch are currently repeating the final episodes of Doctor Who Series 1, starring Christopher Eccleston and Billie Piper, (every week day at 7.15am and 4pm) with a re~run of Series 2 starting straight after. During this weekend (Aug 20/21), Watch will be screening their remaining Series 4 episodes, with David Tennant and Catherine Tate.