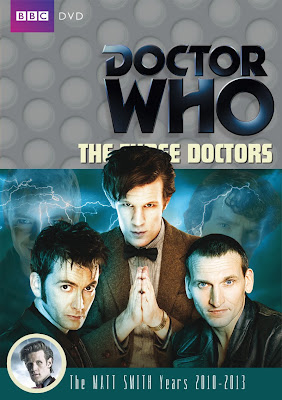 PLEASE NOTE: This was inspired by the cover for Doctor Who: The Encyclopedia - it's just a bit of fun... Click on the pic above for a bigger version and check out the details and extras below for The Three Doctors DVD release:

Featuring Christopher Eccleston, David Tennant and Matt Smith as The Time Lord, The Three Doctors unites the actors who have played The Doctor since 2005 in this special 50th Anniversary feature-length episode.

A friendly stranger warns The Doctors of dangers to come only for the three incarnations of the Time Lord to realise they knew this man all along...

John Simm and Benedict Cumberbatch join the cast as The Master, with Catherine Tate returning as Donna Noble, Alex Kingston as River Song and Bernard Cribbins as Wilf Mott.

• Doctor Who Confidential
An inside look at The Three Doctors. Narrated by Stephen Fry.

• David Tennant's Video Diaries
Behind the scenes with David Tennant, including interviews with cast and crew.

• Out~takes
Bloopers and gaffes from the set of the production.

• Deleted and Extended Scenes
A chance to see scenes that were cut during editing, many of which are presented before post-production effects had been added.

• Trailers
All the BBC television and radio trails for the special, including the specially-filmed cinema trailer (also available in 3D).

• Isolated Music – option to watch the episodes with the isolated music score.