The countdown continues, and here's the final part of Blogtor's list of things he'd like to see during the 50th Anniversary celebrations for Doctor Who during 2013. Read Part 1 HERE, Part 2 HERE, Part 3 HERE and Part 4 HERE. PLEASE NOTE: They're not all entirely serious...

10. New title sequence/theme tune arrangement
We'll all be bored by the current one by 2013, won't we?? Maybe the production team could see fit to bastardise past title sequences and plop Matt's big shiny face in there replacing the old guys (without that horrific McCoy wink of course). Or, why not, have Mazza dress up as them? No, sorry. That was silly. Similarly, the theme tune could be reconstructed to fit elements of the various arrangements from over the years (which was kind of done in The Five Doctors end titles). Though, I'm happy enough for a completely new version. Maybe with someone singing the words, "Doc~tor Whoooooo" over the music? 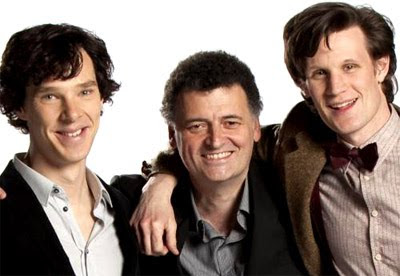 9. Sherlock Crossover for Children In Need

Scene One (Interior 221b Baker Street)
The Doctor
Hello, Sherlock!

Sherlock
Did you bring The Teselecta?

END
Writes itself, really.
8. Appearances From Past Companions
You can't have a party without participants! And you can can't spell participants without party! (Almost *coughs*). Looking forward to the picnic on Adric's grave and the return of Adam...

7. Davros Origin Story
Or Young Dave Ross as the BBC are hoping to market it. RTD commented in his book, The Writer's Tale, that he did consider examining the back story for Dave in The Stolen Earth/Journey's End - a pity he didn't. But it does mean that it's still up for grabs (if you don't pay attention to Big Finish audios, that is). Potentially, it's a fascinating story with some equally fascinating debates to be had about science and morals to be had. Oh dear, I went all serious there. I do apologise.

6. Doctor Who Confidential
Without wanting to get into the whole "Dear BBC Three, what the 'eff were you thinking?" debate when Confidential got the boot (but seriously, what were they thinking??), surely for the 50th Anniversary someone should be there to capture the momentous events? I would sincerely hope that DWC gang were on call for all the behind~the~scenes actions on that year's filming. And, of course, a series of documentaries on the 50 years of Who~action - perhaps utilising some of the great talents that work on the "classic" DVD range. 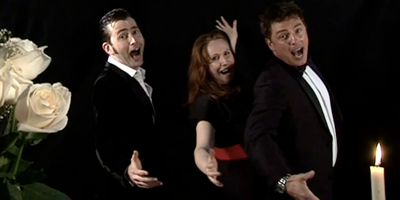 5. Musical Episode
If RTD were to come back to write a Doctor Who story (see No. 17), then it should be this one - a musical! Nobody does big and brassy like Rusty D. Along with the veritable talents of composer Murray "Muzza" Gold, who recently won an award for his own work Kafka: The Musical, the pair of them sure could whip a tune and a tale. Springtime For Davros maybe? I Could Have Sonic'd All Night possibly?? Somewhere Over The Medus Cascade perhaps??? Singin' in the Destroyed Remnants Of A Spaceship That Blew Up Above The Planet???? (That's quite enough of that - Ed.)

4. BBC Screens "Classic" Who
6pm. Every night. All year. Simple. 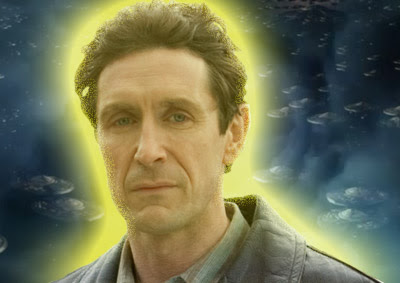 3. The Time War starring Paul McGann
I've always thought it was a missed opportunity that one of the "Doctor~lite" episodes (such as Blink or Love & Monsters) wasn't used to have a flashback containing the antics of The Eighth Doctor, played (for one night only!) by Paul McGann. Specifically the antics which, presumably, led his regenerating into Christopher Eccleston (I'm sure he could be CG'd in as he doesn't want to bathe in the Time Lord river anymore). Fighting off Daleks and burning up Gallifrey, killing all his family and friends - the feel~good hit of the summer!

2. The Return of "Old" Doctors
Predictable as ever, Blogtor. Still, it should happen.

1. New Doctor
What Matt Smith leave?? What are you talking about Blogtor? A great end (or start, depending on how you view it) to the 50th Anniversary would be a rousing finale for The Eleventh Doctor, in a special filled with his past incarnations and probably with the help of Field Marshall Trenzalore (almost an anagram of "The Master"). A better way to end his tenure in the TARDIS I cannot image, setting up the appearance of The Twelfth Doctor with trouser~tightening anticipation. And if they could keep the regeneration a secret? Well, that would be just be wizard! #smileyemoticon