Former Doctor Who David Tennant, who played the Time Lord in the Noughties, and actress Sophie Aldred, companion Ace in the Sylvester McCoy years, are to star together in a new "multi-platform fantasy action adventure" series from CBEEBIES, Tree Fu Tom. 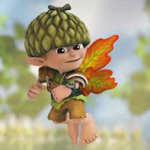 Aldred plays the titular character Tom whilst Tennant (using his own Scottish accent) plays his friend, Twigs (pictured right); from the BBC:

"Children can actively participate in the story, moving along with Tom to create Tree Fu magic. All the magic spells and movements are designed to nurture child development, particularly children with dyspraxia.

Tree Fu Tom is set in a world where movement creates magic. Using Tree Fu spells Tom is transported into a wondrous enchanted kingdom called Treetopolis where he becomes a tiny but mighty magical superhero. Here, Tom and his best friend Twigs are inseperable and become embroiled in amazing, action-packed adventures which always lead to trouble, if not catastrophe. It’s up to Tom to save the day but he can only do this with help from the audience to create Big World Magic. The audience must help Tom every step of the way in these roller-coaster action packed adventures."
David Tennant interview | Sophie Aldred interview