Let me share with you dearest blog~a~tron my story of Nightmare of Eden (*cue everyone heading off to the Extras section*), as I have a long relationship with this 1979 classic. Yes, "classic". You read right. In the world of Doctor Who, and is revealed graphically in the extras, this Tom Baker four~parter has rather a sour name; "laughable" is usually the word it arouses. But not for me.

I'll explain. When I was "getting" back into Who (around 1992), I was collecting all the stories I could - usually taped off UK Gold (using various friends who had such a remarkable thing as "satellite" TV) and purchasing the odd one here and there. Heading this journey was my quest to find a story which utterly horrified me as a youngster and one that stuck in my mind as scaring me to my very core. (Can you see where this is going?)
There was a story, which I was pretty sure starred Tom Baker (who, I should point out, put the willies up me as much as any Dalek or Cyberman did), that included a painting, or screen, that came to life (and possibly a jungle - leading to mis~placed excitement when I came across Planet of Evil and Kinda). People would go into it and bad stuff would happen.... *shivers* And then whatever was in there, escaped... *double shivers* 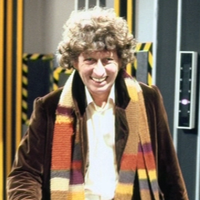 Even worse, these things, these monsters, were disgustingly malevolent beings and THE MOST SCARIEST, MOST BONE~CHILLING THING EVER!
There was about a year or so of searching, and remember this was before the internet and any research would have involved tracking down magazines and books (no easy thing, even then). I was also searching alone. A solitary wanderer. With no fellow fans to call on for help (ah, those were the days). This would involve receiving new episodes and then watching in hope, only to discover that it wasn't the one I was looking for. The one. The story that had petrified me as a child. The story, that even as adult, made me quake in my very trousers. #quake

But, as you can guess, I finally found it.


Thanks to a chum who'd taped Doctor Who off a Sunday morning omnibus on UK Gold for me (well, his dad did anyway), the story that had alluded me for some time was back in my hands. Instantly, when I started the first part, I knew that the quarry had found its prey. The story, for those wondering why I am regaling everyone with this heartbreaking fan~tale, is Nightmare of Eden.
Watching it again back in the early Nineties was an eye~opener. Although I could recognise the facets that had terrified me so, some fifteen years previous, the comedy of the performances and production was most overwhelming. I had truly put my demons to bed. And slept with them. Twice.
Eden is, quite rightly, criticised for its poor visuals, heightened performances and disastrously laughable Mandrels (pictured for your pleasure here). For me, however, I love it. It's one the stories that I have watched over and over again, enjoying each watch even more. It does have some very unique elements for Doctor Who and it's pure science~fiction. The drug motif that runs throughout, and is never disguised, is handled in a most intriguing fashion; throwing up much for discussion. 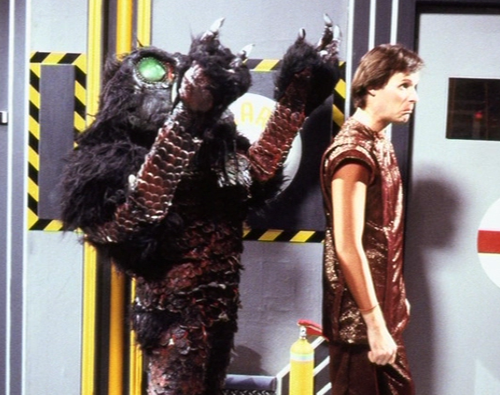 I'll never tire of Nightmare of Eden and it should be noted that the story finished with more viewers than it started with (so they were doing something right). It's of its time, for sure, but it always reminds me that I was once scared. Once terrified, even. A feat that no television programme or film, for that matter, has managed. Now, of course, I sit and watch it laughing uproariously wasted and blitzed out of my mind on Vraxoin™.*
EXTRAS 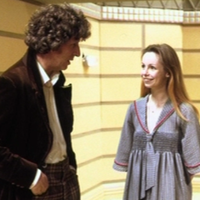 This is the first time, in a while, that the extras on a classic Doctor Who DVD have left me wanting somewhat. The main doc, The Nightmare of Television Centre, barely clocks in at fifteen minutes and features only three contributors. No testimony from any of the cast (and no archival footage) - a great pity as the actors are often the focus of much discussion when it comes to Eden.
Thusly, it's a rather dry affair focusing solely on the negative aspects and troubled production. Factually it delivers but, on an entertainment level, the docco is disappointing. Amusingly, however, the assertion that the mandrels "wouldn't scare my 18 month year grandson" is proved total balderdash by yours truly. They certainly scared me (see above).
As an accompaniment Going Solo, where writer Bob Baker talks about his first lone effort for the show, is again insightful though slightly dry. To moisten up, The Doctor’s Strange Love features comedian Josie Long, writers Joe Lidster and Simon Guerrier chatting about the more amusing facets of Nightmare of Eden. It's a loving poke in the ribs but it's clear they enjoyed the story. Bizarrely, this piece takes place on the attic set of The Sarah Jane Adventures, which makes for a delightful backdrop. It's also longer than the main documentary which makes for an odd weighting, as it were, in the extras department.

Lalla Ward pops up all haughty and iirresistible in an appearance on Ask Aspel (a chat show from the days when people thought that Michael Aspel was an acceptable choice for a television host). It's great to have archival footage like this and wonderful to see Lalla at the height of her popularity.
The audio commentary features said Time Lady, effects designer Colin Mapson, writer Bob Baker (on Parts 1 and 2), make-up designer Joan Stribling (Parts 2 and 4) and Peter Craze, who played Costa (Part 3) and is moderated by Toby Hadoke. To be honest, and this is no criticism towards Toby, I'm not really sure why the producers felt a moderator was needed; those involved are a lively bunch and need little prodding.

Though, I will say, Mr Hadoke does get points off for getting them to recite the now-obligatory rehearsal complaint (in ye olde ancient times, when everything was so much better *coughs*, actors rehearsed before filming and now they don't do that *boo hoo*). It's an argument I have heard mentioned on commentaries too many times to mention. And yet, here I am again mentioning it. We get it. Old people think the old days were the best. *slow hand clap* Newsflash: the acting in Nightmare of Eden, for example, doesn't look like it was rehearsed that much to me. 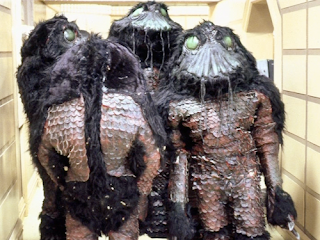 Anyway, *brushes anger off*, it's a great listen with an interesting discussion about fans and conventions (which is slightly patronising in parts). As a final point, the Production Notes are as brilliant as ever and full marks for getting a gag about Raxacoricofallapatorius in there.

The DVD is worth purchasing for the story alone. Whether you like Nightmare of Eden or not is another matter but it demands a viewing and it will leave some impression on your mind (positive and negative). Sadly, Tom Baker isn't present anywhere on the extras, which is a great shame, but I fully understand that costs and availability may have been deciding factors. It's not a perfect release but, like the story itself, has an odd charm and playful feel.
BLOGTOR RATING 8/10
Thanks to BBC Worldwide
RECENT POSTS
Series 7 Trailer!
Series 7 news [Spoilers!]
Series 7 trailer breakdown
REVIEW: The Official Doctor Who Convention
Podcast Special: Official Convention Press Conference
Tweet