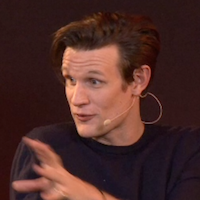 Earlier this month, popular actor Matt Smith made an appearance on the Regent Street Apple Store in London and the podcast is now available HERE (in both audio and video form). Talking about next week's episode, The Bells of Saint John, he says, "I think Steven watched James Bond and got slightly inspired by that," and, "There is a bit of Twitter bashing goes on."

Regarding new companion Clara, Matt stated, "She has reignited his curiosity that he has about the universe. She's something impossible to him."

On Journey To The Centre of the TARDIS, Smith lamented, "I really wanted to see The Doctor's bedroom, but we didn't. You sort of learn more about who the TARDIS is, and what effect she can have on the shape of that spaceship."

Regarding the finale, Matt said, "The finale is going to be really exciting. Because, you know, what comes next is the 50th [Anniversary Special]. And, boy-oh-boy, is there a *makes a whip sound, whilst miming a batting motion* at the end of that."

Matt also chats about his favourite Doctor Who episodes, Sherlock and says he'll be back to film the 2013 Christmas Special in "August or September".