Wireless Theatre Company’s take on the Spring-Heeled Jack story is an atmospheric, exhilarating, beguiling piece of radio drama.  The writers have taken the known facts of the case and expertly weaved them with a story of devil worship that appears to pay homage to the classic Doctor Who Jon Pertwee story, The Daemons. The Who influences are everywhere, from the opening music (which also strangely reminds me of Dallas), to Julian Glover’s (City of Death, The Crusade) participation as Lord Wayland, to the fact that the lead character is called Jonah Smith.  The eagle-eared among you will spot other parallels as you listen, but I wouldn’t want to give everything away!

Gareth Parker and Robert Valentine’s storytelling is excellent. The dialogue holds your interest and manages to elucidate the plot expertly, whilst simultaneously depicting and delineating the various characters in a sympathetic manner.  The writing is of a very high standard throughout, with some marvellous lines and phrases which stick in the memory – my favourite being “reform bills that pass like ghosts through Parliament’s bladder!” 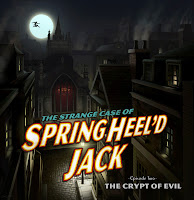 The writing is greatly assisted by the sound in all three episodes.  Both Francesco Quadraroupolo’s music and Andrew Swann’s sound effects help to build the atmosphere to the point where you can almost see what is going on.  I could easily imagine myself in Victorian London, and the devil worshipping ceremonies were particularly effective.  Of course, this is also largely due to the quality of the acting; the way that everything is edited together (Andrew Swann again) and the overall production values of the serial.

With a cast of 23, it is impossible for me to mention everyone, suffice it to say that all should be extremely proud of their performances. Christopher Finney and Matthew Jure gave strong, believable, sympathetic performances as Constables Jonah Smith and Toby Hooks respectively, as did Jessica Dennis in the lead female role of Charlotte Fitzrandolph.  All of the female characters were played very well – I particularly like landlady Mrs Bairstow, played in an amusing and entertaining manner by Lizzie Goodall.  Julian Glover was a marvellously nefarious villain, and Jack Bowman did a wonderful job of portraying the evil and menacing Mr Chough. 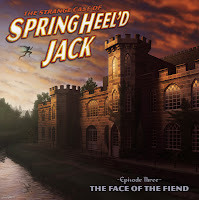 The Strange Case of Spring Heel’d Jack is in three episodes: The Ghost of Clapham Common; The Crypt of Evil and The Face of the Fiend - all available to downloaded for free from their website, www.wirelesstheatrecompany.co.uk. Further episodes are promised, which I, for one, shall certainly be on the lookout for!

For a FREE download of the series, visit HERE